From the Wiltshire Gazette and Herald – 7th October 1948 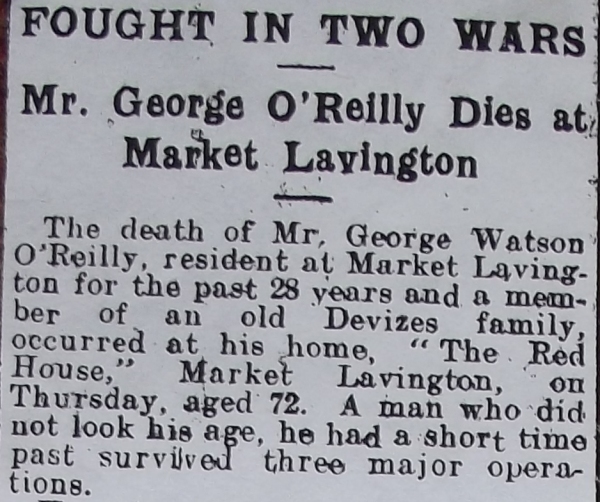 The death of Mr George Watson O’Reilly, resident of Market Lavington for the past 28 years and a member of an old Devizes family occurred at his home, ‘The Red House’, Market Lavington on Thursday, aged 72. A man who did not look his age, he had a short time past survived three major operations.

He was the eldest son of Mr Thomas George O’Reilly, an Irishman who was in business as a silk mercer at 4 and 5 High Street, Devizes (now Messrs W S Budd and sons) and who married a Devizes woman. He was born in Devizes and educated at a private school in Salisbury. For a time he took over his father’s business but later emigrated to Africa and Canada. An old member of the Royal Wiltshire Yeomanry, he saw active service in the South Africa War, in which he gained seven decorations. He was in Canada when the 1914-18 War broke out and he left immediately to re-enlist seeing service with the ‘Princess Pat’s’

Afterwards he was with the late Mr F H Sayer, manager of the Lavington and Devizes Motor Services. When this was acquired by the Bath Tramways Company he took Cherry Orchard, Market Lavington, as a poultry farm going to live at Market Lavington in 1920. As a poultry farmer he won many awards with his birds. Three years ago he retired, selling the farm to Messrs James Bros.

On 10th July 1945 he married Miss Florence Anna Eldin of Market Lavington, well known as the organist at the Parish Church.

Unable to be present were the Rev C Essington Boulton (Alderholt) who would have read the lesson had he been present, Mr Harry Chivers and Mr T Sturton.

The funeral arrangements were carried out by Mrs L E Gye and wreaths were sent as follows:-

To my own darling sweetheart and husband with all my everlasting love of years to you. May you have peace in God’s care who called you. From ‘The Kid’; To George with loving and pleasant memories  from his brother and sister-in-law, Charlie and Madeleine; Smiler and Robin; Major the Rev and Mrs C Essington Boulton (Alderholt Vicarage); Bertha Richards; William and June Holloway; Win and Tig; Mr and Mrs N Andrews, Stanley and Ian; John and Reg Cooper; Mr and Mrs Ron Francis; Mrs Trotter, Ivy, Jess and Fred; Mr and Mrs H G Ellis and family; Neighbours and friends; Mr and Mrs W Crisp, Ethel Gye, Maureen and Nora; Enid and Lesley; Will and Min Tucker; Members of St Mary’s Church Choir, Market Lavington; Fred Payne;  Bert and Edith Pritchard; A, F and MJ Burbidge; All at Cherry Orchard Poultry Farm.