The doctor, mentioned in the title was the Market Lavington medical practitioner from the early 1950s. For ten years he lived in the village, at Greystone House in the High Street which had long been a doctor’s house. In 1961 he and his family moved house, but for a while, continued to use the surgery at Greystone House. Later he had other premises, but the plaque we have comes from Greystone House. 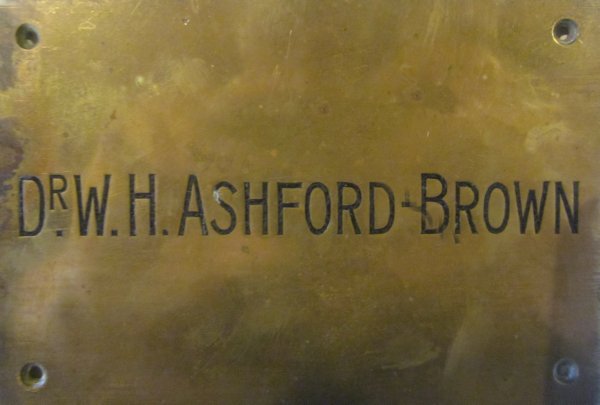 Plaque from the Market Lavington surgery of Dr Ashford Brown

The plaque is made of brass, about 12cm by 8 and just carries the doctor’s name.

It is nothing remarkable but serves as a reminder of days when a room in a house (or even a caravan) was a doctor’s surgery. Nowadays, Market Lavington has a large, dedicated surgery building. There are four partners – doctors who run the surgeries, two practice nurses and a health care assistant, a practice manager and, no doubt, other admin and clerical staff.

Dr Ashford Brown, who retired in the mid 70s and died in 1998, would be amazed to see such services.