Family history researchers should not forget that there were several burial places in Market Lavington. Two, sadly, can no longer be visited. These were at the old Baptist chapel which is now a fish and chip shop and also at the old independent chapel which had previously been the Quaker meeting house. But as well as St Mary’s churchyard there is also the Drove Lane cemetery. This was once used by the Congregational Church but these days it is actually a cemetery for Easterton and the surrounding area.

Here we present information about one grave there. 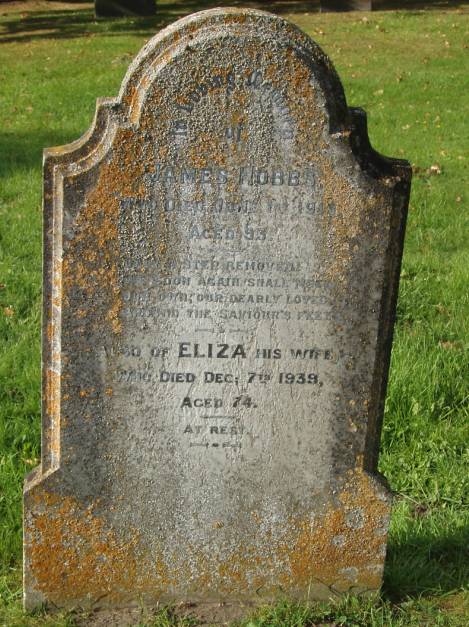 In loving memory of James Hobbs who died June 1st 1913 aged 53
Only a step removed. We soon again shall meet
Our own; our dearly loved around the saviour’s feet.
Also of Eliza his wife who died Dec 7th 1939 aged 74
At rest

James Hobbs was born in Easterton, a tithing of Market Lavington in Wiltshire, around 1859. Submitted IGI entries give a birth date of 21st May and a baptism on 26th June 1859. The parents given on these are William and Mary

In 1861 he was with his parents, William, an agricultural labourer and Mary. James, aged 1, was the youngest of the three children at home.

In 1881 William and Mary, along with James, were still in Easterton, living on White Street. William was a market gardener.

Eliza Lane was born 20th April 1865 and baptised at Market Lavington on 4th June. Her parents were William and Ruth.

In 1871 the Lane family lived at Market Place, Market Lavington. William was an agricultural labourer. Five year old Eliza was the oldest of the three children at home.

In 1881 Eliza worked as a live-in servant for the Pomroy family on High Street, Market Lavington.

In 1891 James and wife Eliza lived on White Street, Easterton. James worked as a market gardener. Eliza, aged 25, had been born in Lavington. James’s widowed mother, Mary lived with them and also present was James’ brother in law, 16 year old Robert Lane from Lavington.

In 1901 James and Eliza were the only occupants of the White Street, Easterton house. James was now a dairy and agricultural farmer and listed as an employer.

In 1911 James and Eliza were still living on White Street in Easterton where James was a farmer.

This has been borrowed from the site at http://www.locksands.esy.es/lavington/index.html where information about other graves can be found.