Sometimes we get given a picture, quite unexpectedly and with quite a different tale to tell. So today we can bring you a picture of the stream in Easterton, by the pump, with quite a flock of waterfowl. 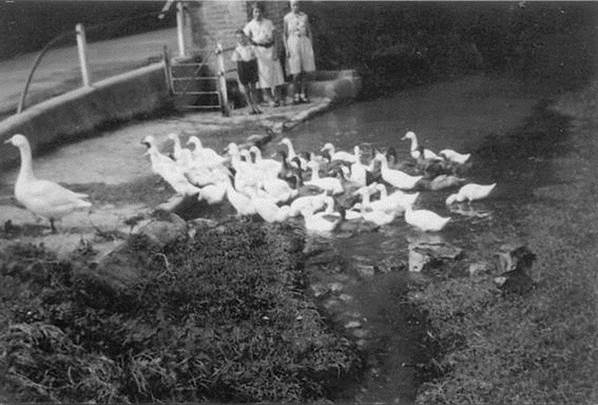 By Easterton pump in the 1930s

The ducks appear to be being led by a goose. Perhaps this collection belonged at Halstead Farm which is very close by.

But let’s now look at the people who are looking on. They are the Bulmer family and they lived in Yorkshire. But Mrs Bulmer, in the middle, had been Phyllis Gertrude Clelford and had been born in Easterton in 1900. She is the lady in the middle, with her children on either side.

Phyllis’s parents were Henry and Emily. Henry was a farm labourer and had been born in Easterton. Emily (née Pinchen) was a Market Lavington girl. Phyllis was the youngest of their eleven children.

Phyllis would have known this stream well. One of her early jobs was washing out jam jars in the stream for Samuel Moore’s factory which is very close by (or rather was, for the buildings have just been demolished). Phyllis had also been a scullery maid at Easterton manor and she also did washing. She charged one halfpenny per item, whether it was a handkerchief or sheet.