Ducks in the Churchyard

For some time, our curator has been involved in recording the graveyard at St Mary’s, Market Lavington. He’s also done a bit of recording at the Drove Lane cemetery – once the burial ground of the Independent Church. He’s also made a start on the St Barnabas, Easterton grave yard. Time is limited. Can anybody else help? You can see what Rog does by checking out his web site at http://lavington.99k.org/lavington/index.html

But to give an idea here, this is what we know of the three Ducks in St Mary’s church yard.

We start with an image of a grave – in this case it is that of George Duck. 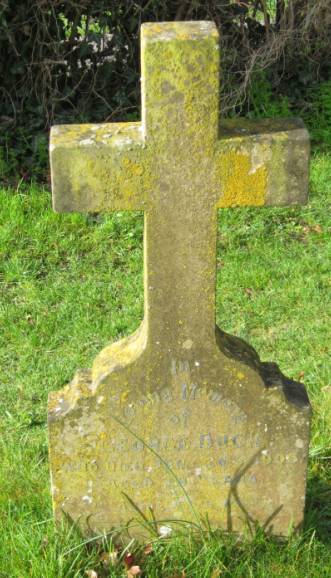 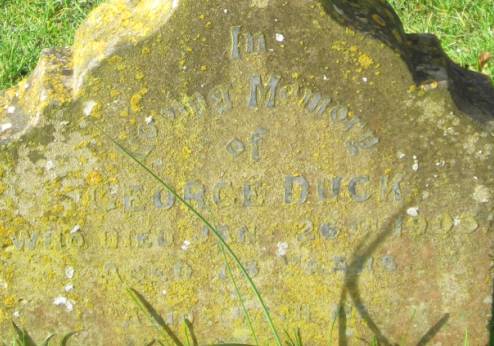 It reads.
In loving memory of George Duck who died Jan 26th 1903 aged 78 years
Abide with Me

George Duck was born in Easterton in about 1826. Back in 1826, Easterton was a part of the parish of Market Lavington. Looking for a baptism in the Market Lavington register proves fruitless, however. A labourer, John Duck and his wife Susanna, lived in Easterton and had children in the period when George was born. Perhaps they were his parents.

Sadly, there is no 1841 census for Market Lavington (which included Easterton). The first record we can find of George is in 1851. At this time, George was still a single man working as a labourer. The head of the house, in Easterton was his mother who was, indeed, Susanna. She was a widow and was in receipt of parish relief. There were two much younger children at home as well. Isaac Duck was 14 and was described as ‘at home’. Emma Duck was 10.

In 1861, George lived at the Manor House, Easterton where he was a groom. His wife, Eliza was a house servant. Both were in their mid 30s. Eliza has proved hard to trace.

The 1871 census still has George and Eliza at the Manor House. George is now called an Agricultural labourer. They have been joined by a 4 year old son, John. John Duck is also buried in Market Lavington churchyard. He was buried in 1913.

In 1881 George and Eliza were still in Easterton. George continued to work as an agricultural labourer. No address is given.  John William Duck, their son was now said to be 16. He was a scholar but also a pupil teacher.

Eliza died, probably in 1890 so the 1891 census sees George as a widower, still living in Easterton and still working as an Agricultural labourer. His address was simply given as High Street.

His son, John Duck was working as a teacher. He was boarding at Bromley in Kent.

However, John was back in Wiltshire in 1892 when he married Ellen Lye. When she died, in 1945, she became the third Duck in the graveyard.

In 1901 our three Ducks were together and living in Market Lavington –next door to the old Vicarage which now forms part of the nursing home. John was a schoolmaster and we have many photos of Mr Duck at Market Lavington School. 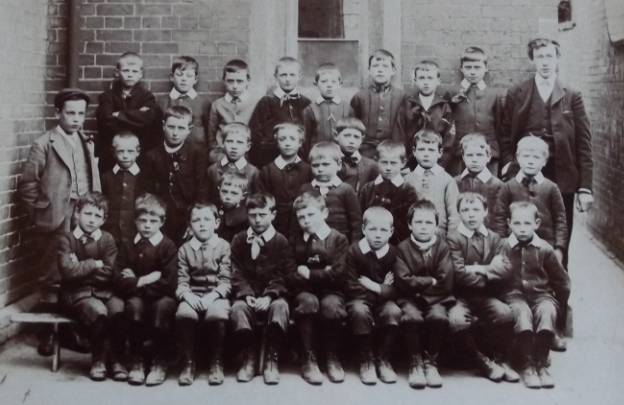 A Market Lavington school photo from about 1900. John Duck is the teacher on the right. The large lad on the left was a monitor - a teacher's helper. He is believed to be Robin Burgess

Ellen had been born in Market Lavington and we can trace her back to being the 1864 born daughter of James and Maria Lye. James was, and remains, well known as a champion fuchsia grower and producer

John and Ellen had two daughters. Mabel was aged 7 and Ada aged 1. Both were born in Market Lavington.

And 76 year old George lived with his son and family. He had no occupation.

In 1911, John, Ellen and the two daughters lived at Sunnyside, Oak Lane, Easterton. John was head of the school – Market Lavington School.

Sadly, John died quite young for he was just 48 when he died. The Reverend King of Easterton officiated at his burial service on 4th July 1913.

Ellen moved back to Market Lavington and lived on Church Street. She was there for the 1926 electoral roll and again in 1939. Her daughter Mabel was also an elector at the same address in 1939.

Ellen died in 1945 and was buried in Market Lavington churchyard on 9th March.