Easterton was once a tithing of the parish of Market Lavington but by 1911 it was well established as a parish in its own right. A church and a school had been built and there were shops and pubs to provide for the needs of Easterton folk. But one wonders whether they were really prepared for an overhead surprise on 10th June 1911 when the first aeroplane to be seen in the area flew over the village. Fortunately, a photographer (possibly a Mr Wharton) was ready. 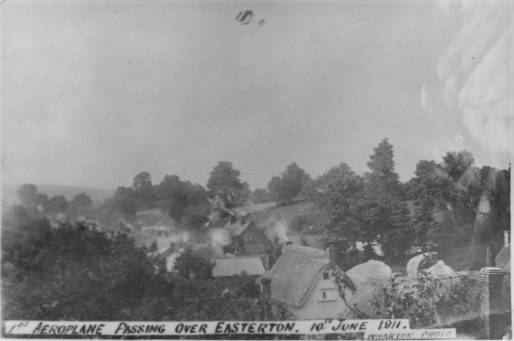 Starting with the village, the thatched cottage with the gable end facing the camera is ‘The Homestead’ so our view is along the village street looking towards Fiddington and Market Lavington.

The aeroplane, high over the village may well have been of the type known as a Bristol Boxkite. A photo of such a plane at Stonehenge, also in 1911, is shown below. 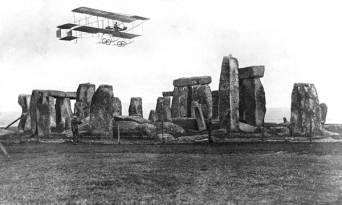 Was the Easterton aeroplane a Bristol Boxkite, like this one seen at Stonehenge, also in 1911?

Residents of Easterton and elsewhere will have a chance to see many more historic images of Easterton, and to enjoy a historic Easterton quiz at the Easterton Country Fete on Bank Holiday Monday afternoon (30th August 2010) at and around Easterton Village Hall.