Ah yes! Times past in Easterton Street! It all looks so quiet and peaceful. 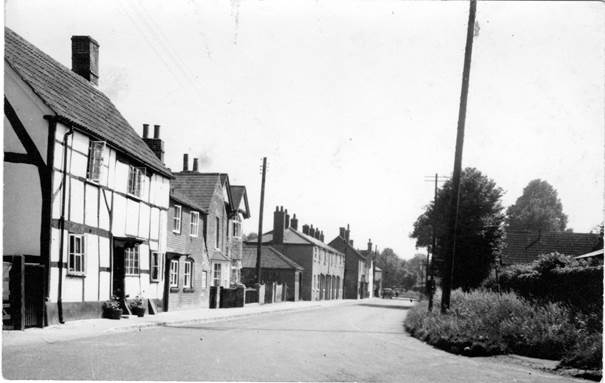 Easterton Street in about 1950

Those of us who regularly need to get through Easterton by car will marvel at the absence of parked cars.  There’s certainly no need for traffic calming measures in Easterton these days. The parked cars make sure that traffic has to be slow moving – and that, of course, is no bad thing. Most street side cottages do not have any off road parking so these days there are always cars parked along the left hand side of the street as we look at it.

There are various clues we can use in trying to date a photo like this, which comes with no caption. The first thing to notice is a total lack of TV aerials. This almost certainly dates the photo to pre-1953. It was the televising of the coronation in that year that really launched the mass TV era.

Secondly, there is a car in the photo. It’s a distant one, way down at the far end of the street.

The one and only car is in the distance

It isn’t clear enough for us to identify but it has a late 1940s look to it. So maybe we should date the photo to about 1950

The house immediately on the left is The Homestead and that still looks much the same today. It has that steeply pitched roof which is a tell-tale sign of thatch being used in the past. In fact, the whole street looks instantly recognisable as Easterton.

Thanks to Eric and Pat for getting this photo to us.