Easterton was way ahead of Market Lavington when it came to the village hall. The Easterton building dates from the 1950s and it offered much better facilities than the old Parish Room in Market Lavington. Of course, Market Lavington now has its fantastic, twenty first century Community Hall but Easterton’s still does sterling service as well.

Since the hall opened, a photo of the inaugural committee has hung inside. The photo became older, faded and generally rather careworn and it was decided it was time for it to go. We can thank Bob for rescuing it from oblivion. Here is the picture.

Photo of the Easterton Village Hall Committee, at the hall,  in 1955 – mounted and with full information

Let’s enlarge the people and do a little enhancement. 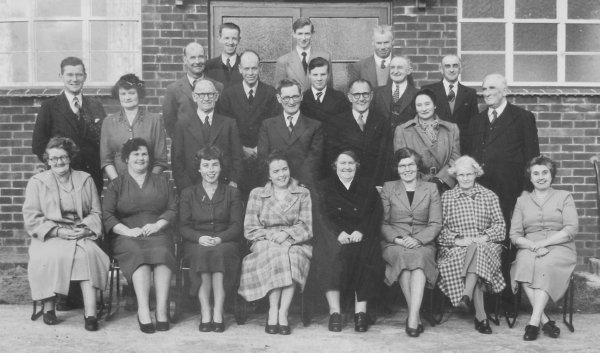 Members of the Easterton Village Hall Committee in 1955

We can be surprised at the size of the committee. It just shows how committed the folks of Easterton were when it came to their hall. The people are all named’

The men in the back row (left to right) are J Dodge, M Dodge and T Jefferies.

In the next to back row we have S Smith, A Chapman, M Wiltshire, J Sheppard and P O Webb.

The photo was taken and presented to the committee by Peter Francis.

The photo is headed up with a title and date.

What a delightful addition to the stock of photos at Market Lavington Museum.