Edward Pleydell Bouverie was the Lord of Market Lavington Manor in the latter part of the nineteenth century. This extract and sketch comes from Vanity Fair for July 17th 1872. They are on display at Market Lavington Museum. 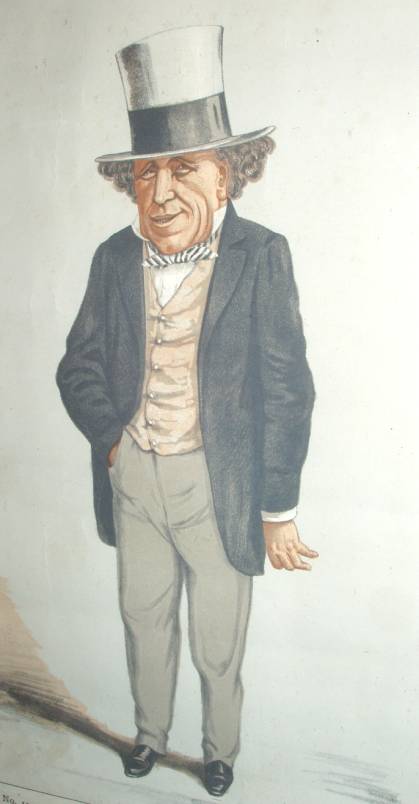 Mr. Bouverie is of that elder and steadier school of Liberal politicians who know what politics mean and who are not to be led away from that meaning by a caprice for any cause or question. A younger son, and conscious of ability, he entered at an early age into political apprenticeship under the auspices of Lord Palmerston and he is now become eminent in the trade.

For many years he followed a regular course of promotion. A précis writer at twenty two, he became an Under-secretary at thirty two, Chairman of Committee at thirty five and President of the Poor Law Board at thirty seven. In the course of these employments he had not only displayed a sound judgement of the relative importance of things but had also acquired an intimate knowledge of the practical machinery of politics and became regarded as a supporter of his party of more than parrot value, having claims that must be considered.

When, therefore, it was known that Mr. Denison was to be translated to an upper chamber there were many who thought that Mr. Bouverie would be his successor in the chair. He did not decline the speakership, however, for it was not offered to him; and he is not unconscious of the loss that the House of Commons has sustained through the omission. All this session he has hung upon the flank of the governments, showing them without pity the blunder with which they are to be charged. The biting criticism of a ripe politician of fifty four and a former ally is not without effect, and Mr Bouverie will one day have to be dealt with seriously as becomes his standing and pretensions.