Enamel ware has always been popular. The glazed surface is hard wearing and easy to keep clean.

Here we have two enamel jugs that were sold in the village by the Phillips family who had a shop on High Street in Market Lavington. 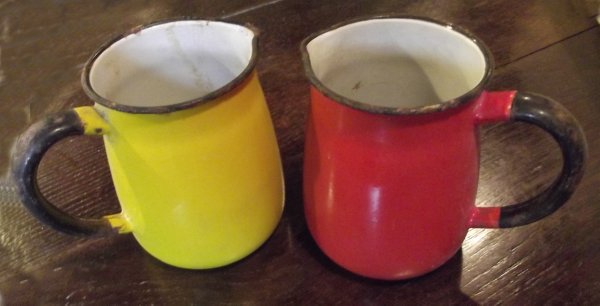 The purchaser was Mr Welch, who decided these bright and cheerful jugs were just the thing back in the 1920s.

The Phillips’s had the shop more or less opposite the Co-op and next to what is now Woodland Yard. They took it over after the death of John Baker in 1903. John had been a tin smith as well as running an ironmongery store. The Phillips family continued the business in much the same way. We can read a little of the business and how it passed through the family by clicking here.

Before John Baker had these premises, the Matthews family were there. They were more in the line of blacksmiths.. Similar styles of business were carried on in that shop for 150 years or more.

But back to our enamel jugs. We know almost nothing about them. They carry no marks, other than those of wear and tear over 90 years. They were, no doubt, regarded as cheap and very ordinary.