Paper ephemara is so often able to bring back memories for people and maybe this little envelope can do just that for some. 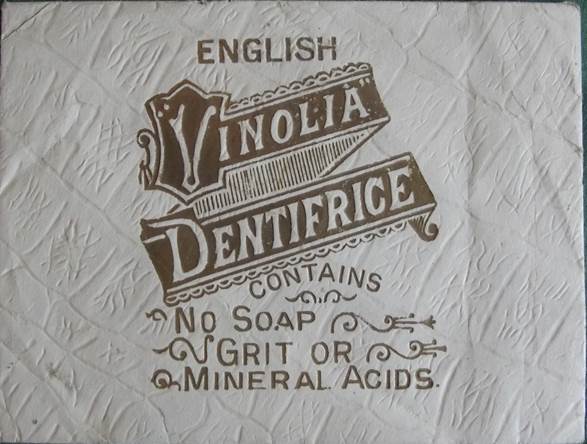 It carries an advert for Vinolia Dentifrice which, it tells us, contains no soap, grit or mineral acids. We do not know what it does contain or, precisely what the product was.

But we believe it was a tooth product – the name suggests that. There are various adverts with images available to see on the web and from these we believe it was probably a tooth cleaning powder, sold in small tins. There was also a version in liquid form.

Our records suggest that the item we have dates from the 1920s. On line images seem to have earlier dates – back into the 1890s.

We believe the Vinolia Company was bought out by Lever brothers in 1907, but of course, the name may well have continued in use. Indeed, it is still possible to buy a soap with the Vinolia name – sold as a souvenir of the soap that went down on the Titanic.