Enos Price And The Hope Coach

Railways came late to the Lavingtons. The line through the parish, with a station called Lavington (but in the parish of West Lavington) opened in 1900. No wonder the coach and four, for transport, lasted into the twentieth century in the area.

One of the earliest records of a coach service in the area was found at number 21 Church Street when the Hopkins family at that address decided to re-make a bricked up window in the 1930s. They discovered the remains of an old notice whilst doing the work.

Here we see young Eric Hopkins with the notice. A best attempt was made to transcribe the notice. 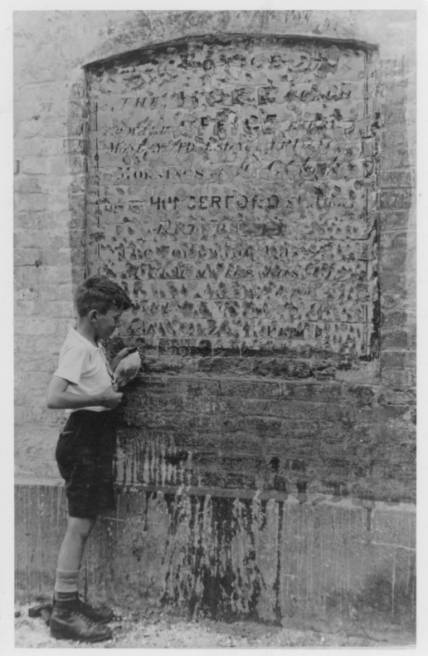 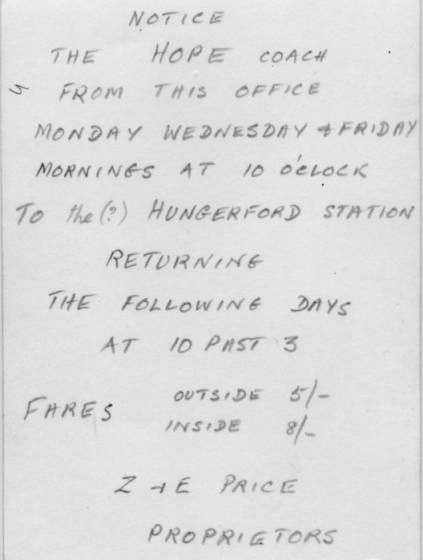 Transcription of the notice, made at the time.

The Hope Coach from this office Monday, Wednesday and Friday mornings at 10 o’clock to the Hungerford Station returning the following days at 10 past 3

But, just when did the coach operate and who were Z and E Price?

It would seem that Z and E Price were the brothers, Zebedee and Enos. In 1851 they were living at home with their father, James, in the Fiddington area. James was a carrier, so horse drawn transport was ‘in the blood’.

In 1861 Enos is described as a coach proprietor and his address – still with mother – is Church Street, Market Lavington.

Older brother, Zebedee was an Inn Keeper to the east of Pewsey – ideally placed as a stopping point on the Pewsey to Hungerford route.

It looks as though the notice must date from about 1861, for by 1871, Enos was farming at Milton Lilbourne to the east of Pewsey.

More about Enos, who after a spell as a milk carrier in London, is buried in Market Lavington, can be found here.