At Market Lavington Museum we do not attend the local fetes to make money for ourselves. We go partly to show the community – not all natural museum goers – that we are interesting and have things they’d like to see. It helps to keep our community profile high.

But we also go because we can learn much from local people who visit the fete.

Here’s a case in point from Easterton fete which took place at the end of August.

We took along a picture showing a school performance. All pictures we take out are copies and laminated to make sure bad weather doesn’t spoil them. It means we can also stick bits of paper on them. And here is this photo. 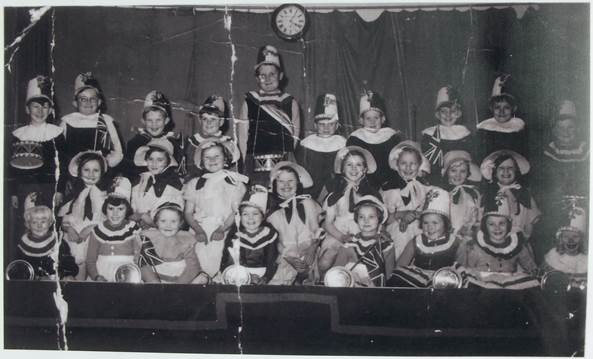 Of the ten people in the back row we know that the 2nd (from left) is Robin McKinnon, the 6th is Robin Kent and the 7th is Piers Kent and the 9th is Paul Delancy.

In the middle row of eight we have, from the left, Peggy Buck, Jane Shergold, Maureen Stockley, Carol Foster, Lynne Stockley, Kasha Zubek and then two we don’t yet have names for.

In the front row of eight people we have, from the left, Hugh McFadzean, Judith Maule and Mary Lodge. Then we have an unknown one and then Carol Foster who seems to be in the front and middle row.  After another unknown we have Susan Jefferies, an unknown and the row ends with Brenda McBeth.

It is great to get so many people named. We offer huge thanks to the Easterton folk who provided the information.

But of course, there are more to name so do get in touch if you can help.