Fiddington House, was, for more than 100 years, a private home for people with nervous disorders – more usually, albeit incorrectly, called a lunatic asylum. Fiddington always had a very good reputation for the way it cared for the residents and its grounds were regularly thrown open to the community for events such as fetes and carnivals. The home also provided much needed local employment. Apart from actual care staff, cleaners, cooks, gardeners and clerical people may have found jobs at Fiddington.

Perhaps it was at one of the fetes that a camera belonging to a member of the Gale family was pointed away from any activity and at the back of the building. It was definitely in the 1920s, according to Tressie Gale who gave the rather damaged photo to the museum. The photo has been at the museum since we opened back in 1985. 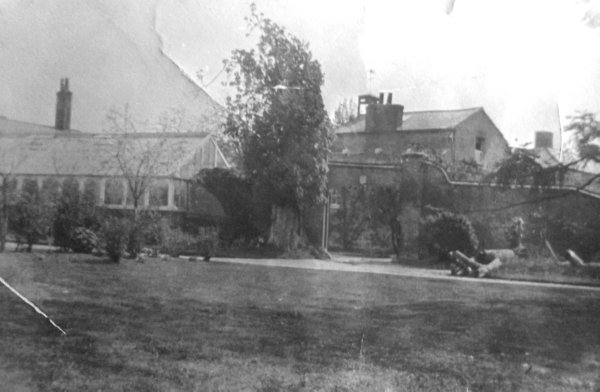 Fiddington House from an unusual viewpoint in the 1920s

We can get some idea of the fairly extensive nature of the premises. The nearest structure here is a rather fine greenhouse. A gateway leads into what appears to be a walled garden and beyond that is a rather austere structure which was the main house.

In 1960, the whole area was swept away and the Fiddington Clays housing estate was built in the area.