Fiddington House has an interesting history although we know little of its origins.  In 1834 Robert Willett purchased house and grounds to replace his first asylum in Market Lavington – there were too many ‘residents’ to cope with at his business in Palm House. And as the asylum made good money, he realised he could make that much more with bigger premises.

But interestingly, Fiddington House, set fair and square between Market Lavington and Easterton was actually in West Lavington. The strange arrangement of parish boundaries passes our present understanding and it was sorted out in the later part of the nineteenth century when Fiddington and its asylum house passed to Market Lavington

It continued a fairly peaceful existence, providing a home for troubled people and employment for locals until the early 1960s when the asylum closed.

Our picture today dates from 1963 when the building still existed but decay is clearly setting in. 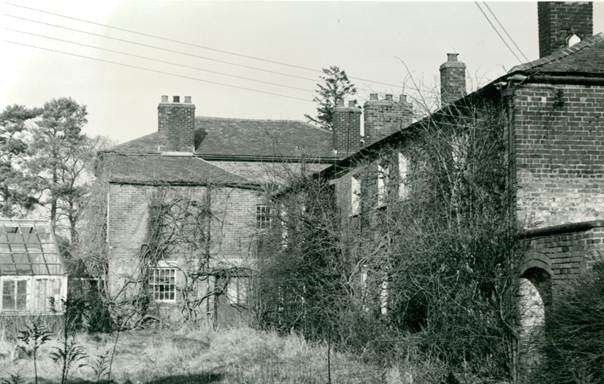 Fiddington House after closure as an asylum in 1963

This is the back of the building. The original Fiddington House is at the far end of the terrace like extension which comes out towards the camera.

Soon after the photo was taken the whole area was cleared and is now forgotten under the Fiddington Clay housing estate.