We do not know where these typewritten notes came from but they tell the story of the origins of the Fiddington Asylum. 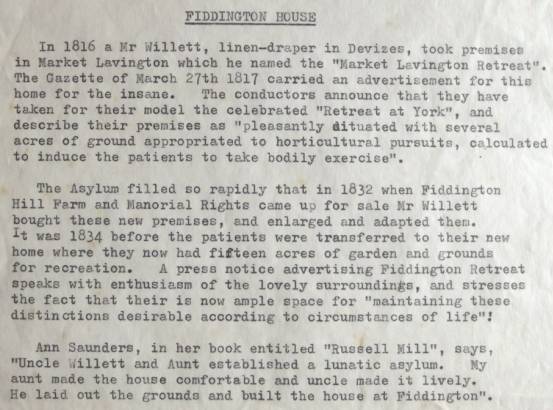 Typed notes on Fiddington House, an asylum at Market Lavington

In 1816 a Mr Willett, linen-draper in Devizes took premises* in Market Lavington which he named the ‘Market Lavington Retreat’. The Gazette of March 27th 1817 carried an advertisement for this home for the insane. The conductors announce that they have taken for their model the celebrated ‘Retreat at York’, and describe their grounds as ‘pleasantly situated with several acres of ground appropriated to horticultural pursuits, calculated to induce the patients to take bodily exercise’.

The Asylum filled so rapidly that in 1832 when Fiddington Hill Farm and Manorial Rights came up for sale Mr Willett bought these new premises and enlarged and adapted them. It was 1834 before the patients were transferred to their new home where they now had fifteen acres of garden and grounds for recreation. A press notice advertising Fiddington Retreat speaks with enthusiasm of the lovely surroundings, and stresses the fact that there is now ample space for ‘maintaining these distinctions desirable according to the circumstances of life’.

Ann Saunders, in her book entitled ‘Russell Mill’**, says, ‘Uncle Willett and Aunt established a lunatic asylum. My aunt made the house comfortable and uncle made it lively. He laid out the grounds and built the house at Fiddington’.

** We have a photocopy of this book at Market Lavington Museum