Fiddington House was purchased by Mr Robert Willett in 1834. He had been running an asylum at Palm House on Market Lavington High Street since 1816. Stories suggest he was forced to move because of complaints from local High Street residents about the noise made by the patients. At the museum we rather wonder if Mr Willett, who was an entrepreneur rather than a medical man, didn’t see the bigger property as a chance to increase his income.

Fiddington House Asylum was registered in 1834 for 180 patients. Whilst it was always a private asylum and well advertised as suitable for gentlefolk of a nervous disposition, it also took pauper inmates. In fact in 1844 when a report classed the asylum as one of the best in the country, there were 144 parish residents – each bringing eight shillings a week of parish money with them and just 36 private patients. We do not know what they paid but it seems a fair guess that Mr Willett’s business venture had a gross income of about £100 per week.

Our photograph, showing two unknown gardeners, was taken in 1912. 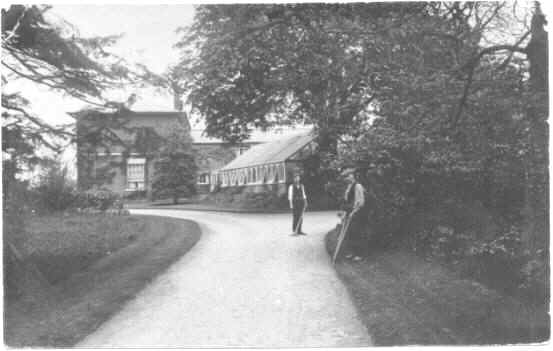 Fiddington House Asylum in 1912 - a photograph at Market Lavington Museum

For genealogists looking for relatives who might have been in the asylum remember that on the censuses before 1891 to look in West Lavington and from then on in Market Lavington (except that one of the best known on-line census sites has, quite wrongly, attributed most of Market Lavington to West Lavington in 1891). Some of the censuses only give the initials of people who were classed as ‘lunatics’ so researchers may find it useful to browse through the pages for the appropriate district rather than just search for a particular name.

There will be more about Fiddington House in the future.