Fixing the location of Easterton School

The complete disappearance of Easterton School means that many people are amazed to know there ever was one. As these pages have shown before, there was actually a thriving school at Easterton which served its community for many years under the direction of head teacher, Gladys Windo.

But just where was the building, which closed in 1971 and was demolished soon after? The photo below holds the answer. 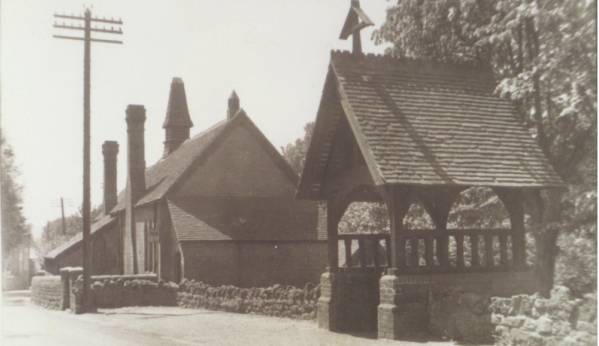 In the foreground we can see the lych gate which provides the entry to St Barnabas Church. It is still there. The school is the building beyond, alongside the main road. The huge chimneys no doubt had a turtle stove at the bottom of them. The building has an ecclesiastical look (chimneys apart) with what looks like a small belfry and arched windows.

We’d love to hear some tales of Easterton School. Maybe former pupils – they’d all be over 45 by now – might remember the teachers, some of the traditions or perhaps how school milk was dealt with. Where were school meals cooked? What were they like? What games were played in the playground?

Do get in touch if you can tell us things to add colour to those past times, when photos were mostly black and white.