The idea of food preservation jars is simple. Prepare food by bringing it to a high enough temperature to kill off bacteria, get the food in the jar and make sure no air, containing bacteria, can get in.

In the UK, one firm dominated the food preservation jar scene and that was Kilner. Now, all such jars tend to get called Kilner Jars, but in fact other companies made these jars as well.

At Market Lavington Museum we have a variety of jars – all used in Market Lavington, of course, and also some spare rubber rings for older style Kilners which were bought at Lavington Hardware, in the 1970s, and then not used. You’ll find them on the kitchen table at the museum. 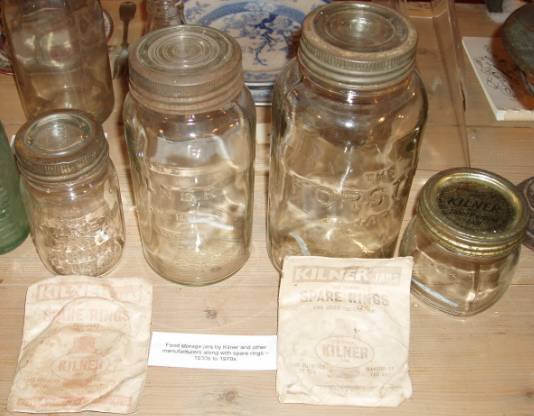 The jar on the left is a true Kilner and probably dates from the 1950s whereas the second jar is definitely a pre 1948 type. The large jar is badged as a Forster and not a Kilner Jar. However, it uses the same top and rubber ring as a pre-1948 Kilner. On the right we have a smaller and more recent Kilner Jar, which was probably bought new in the 1960s or 70s. This had a metal lid, rather than a glass lid with a separate rubber band. Its lid had a permanently attached rubber seal. Kilner’s idea was that a new lid was purchased and used each time the jar was refilled.

During the 1970s it became normal to have a domestic freezer of some kind and the food preservation jar gradually faded out of use but there will be many people who recall using such items.