Frank was a small scale farmer in Market Lavington. He lived at Anne’s Farm which had, previously, been the home of Fred Phillips and before, of his in-laws the Crasswellers.

Frank features in a number of cartoons by EGL, dating from the 1960s. We show one of them here. 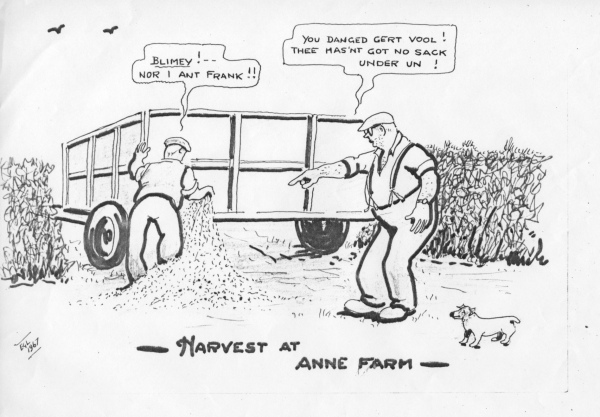 We can see that Frank is portrayed as a large gentleman, which he was, who spoke in something of a local dialect with a Wiltshire accent. That’s all true as well. To those of us who knew Frank, the cartoon is instantly recognisable.

Frank Edwin Arnold  was born about 1897 in Salisbury. His father and grandfather were boot makers, a job which Edwin (as he was called at the time) started in, He was working as a Boot Maker’s Assistant at the age of 13 for the 1911 census.

Frank married Dorothy Draper in the Devizes area in 1922. She had been born in West Lavington in about 1897.

The couple are not shown in Market Lavington on our 1926 electoral roll.

In 1939 Frank and Dolly lived at Morton Cottage in Market Lavington.

Our first record which shows Frank at Annes Farm is a 1954 directory.

Frank and his wife Dorothy (Dolly) were at Anne’s Farm for the 1964 electoral roll.