Market Lavington has several large houses with ample grounds. It is no wonder that there were many gardeners in the parish. Frank Skinn was amongst them.

He was not born in Market Lavington, for he hailed from Lincolnshire. Frank West Skinn first saw the light of day in 1859. His father was an agricultural labourer in the flat lands to the northeast of Boston.

As a youngest son it was, perhaps, no surprise that Frank’s mother died before he was a fully-grown man. 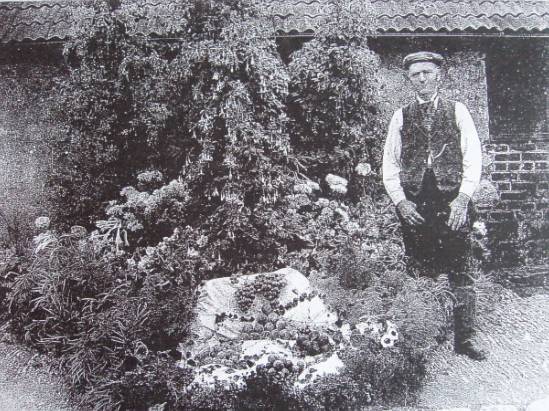 It would also seem that Frank married in 1891. Market Lavington Museum has a document, which shows that the Vicar, Reverend Cokayne Frith, published the banns at St Mary’s Church, but we have not identified just where the marriage took place.

By 1901 Frank (who has now become Mr West-Skinn) and his wife, with sons James and John were living in West lavington but Frank was still a domestic gardener and may still have been in the employ of the Pleydell Bouverie family in Market Lavington.

A third son, Richard was born in the Lavington area in about 1904. (In fact Richard was the fourth child –  message from daughter of Richard received Dec 2011.)

By 1911, Frank and family lived in Glastonbury in Somerset which was to be his home until he died in 1935.

Market lavington Museum has an extract from a Glastonbury paper, which records the death of Frank. The article lacks factual accuracy for the Pleydell Bouverie family were, at the time, the holders of Market Lavington Manor. 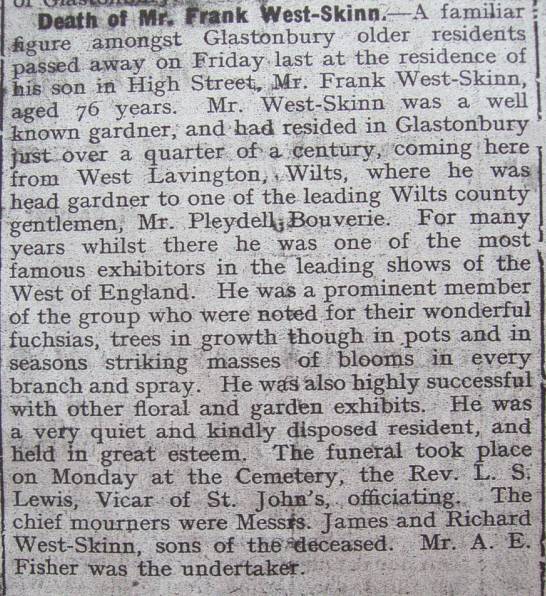 A final message for genealogists. Frank proves quite hard to trace. Partly this is because he is sometimes Frank Skinn and at other times Frank West Skinn but it is also due to the way in which people have heard and written Skinn. Apart from that normal spelling, it appears in some documents as Skin and in others as Skeen. If you can help us fill in gaps in our knowledge at Market Lavington Museum then do contact the curator.