We are quite big on buses at Market Lavington Museum – certainly as far as photos are concerned. The reason is simple. Coach trips, to the coast, from the area passed through Salisbury where a ‘comfort’ stop was made. A Salisbury photographer snapped the people and had prints ready for sale when the coach returned in the evening and made another stop. People, happy and relaxed after a day out bought the images and many have found their way to the museum.

But this one is special. 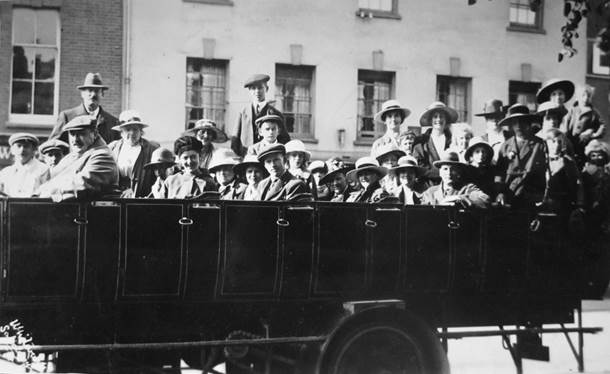 A charabanc trip from Market Lavington in the late 1920s

Now why is that special? It certainly isn’t for the charabanc for we don’t see the front end, although no doubt some will find that chain drive fascinating. And I’m afraid we only know the identity of one of the people on board – but that man makes this a special photo. 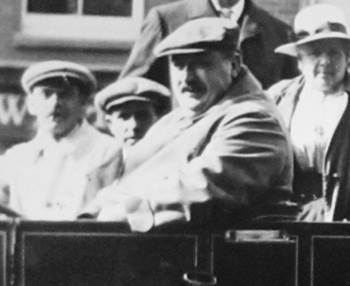 Fred Sayer, who owned the Lavington and Devizes bus company, is one of the passengers

This is Fred Sayer. He’s special because he owned the buses. We believe this photo dates from the late 1920s.

Fred had many buses. The Lavington and Devizes Motor Services Company could carry up to 600 people on outings in their own fleet of vehicles. It was a huge business for Market Lavington.

But Fred still remains a bit of a mystery to us at the museum.

Our basic information is that Frederick Herbert Sayer was born in about 1880 in the Bath area. He married Mabel Weston and they had a son, also called Frederick Herbert. In 1911 he was a bus driver in Stroud, Gloucestershire but soon after he moved to Market Lavington. At some point he progressed from being a driver to owning the company. He ended his days in Cheverell in 1934.

We know that the younger Frederick Sayer married Jess Trotter whose family ran The Volunteer Arms in Market Lavington.

Please do get in touch if you know anything about this man or his family.