We live in a wonderful time for all sorts of reasons – not least in that we have health care as and when we need it. Yes, people moan about the National Health Service. But looking back 100 or more years we can realise that in times before it, most people just didn’t have health care and if they had to, they relied on charity to pay for it. Friendly Societies were a huge help in supporting their members. Today we have a picture of a meet and march in the early years of the 20th century.

The venue is outside the Volunteer Arms, the pub which was on Church Street – and although it has been a house now for twenty years or more, it still has the bracket from which the pub sign hung.

People are dressed up in their smart clothes and the band are there, ready to provide musical support for a march.

Unfortunately, this copy isn’t quite clear enough to read the signs.

But we can see that the film processor managed to get a thumb print on the negative and we can see some of the people quite clearly. 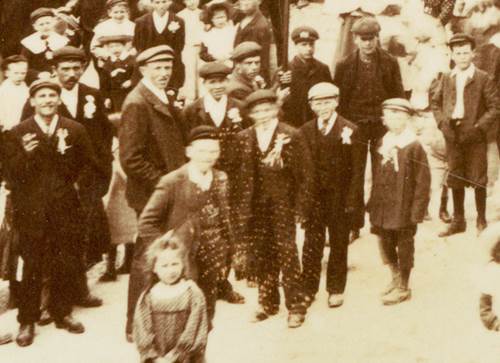 It’ll be a tall order to recognise anybody, but hope springs eternal!