General Charles George Gordon was regarded as a British hero for many military successes and triumphs. He was born in 1833 and saw service in the Crimean War.  His reputation stems more from his time in China where he led a brigade known as the ‘Ever Victorious Army’

In 1873 he entered the service of the Khedive, becoming Governor General of the Sudan. He was instrumental in putting down revolts and suppressing the slave trade. He returned to Britain in 1880, but returned to the Sudan soon after to try to defeat Muhammad Ahmad. This proved to be a struggle too far for Gordon who was beheaded by his adversary in 1885.

This was a time when General Gordon memorabilia came into the market and we have a piece at Market Lavington Museum. 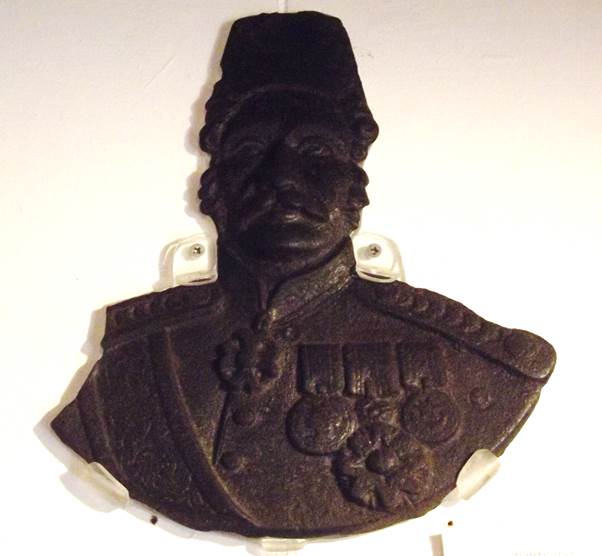 Plaque depicting General Gordon of Khartoum – which can be found at Market Lavington Museum.

This is a cast iron plaque depicting General Gordon, complete with medals and wearing a fez. We know of no original purpose for this other than a decoration. We believe it dates from soon after 1885.

This plaque, with some obvious damage, was given to the museum by Mrs Cox of White Street.

Once again, we’d appeal for any further information about this item.