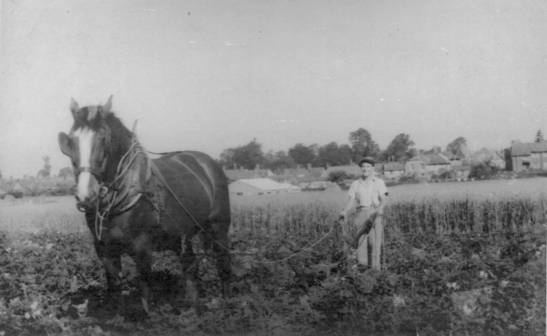 This photo was taken in 1949 and reminds us that the horse was still an important work animal, even after World War 2. We cannot quite make out what tool Noddy is hauling. Perhaps it is some kind of a hoe since there appears to be plenty of vegetation in the area.

Noddy looks splendid with all his tack including blinkers which help to keep his eyes focussed on the job in hand. We know nothing of the ancestry of Noddy.

Geoff Alexander was born in 1932 to Deering Alexander and his wife Beatrice. Deering and family lived and farmed at Southcliffe in the Fiddington area of Market Lavington. Geoff emigrated to Australia and lives there still as do his descendants.

Geoff’s brother Malcolm continued to operate in the Southcliffe area. He became a parish councillor. He left the Market Lavington area, possibly in the 1980s, and his whereabouts are now unknown. Members of Geoff’s family, in Australia, are keen to trace their Uncle Malcolm. Do contact the curator if you have any knowledge of Malcolm.