Many older people will be horrified when it is pointed out to them that 1972 was more than forty years ago. Let’s face it, it feels like yesterday. But roughly half of our population were not alive back then. It is real history to the under 45s. 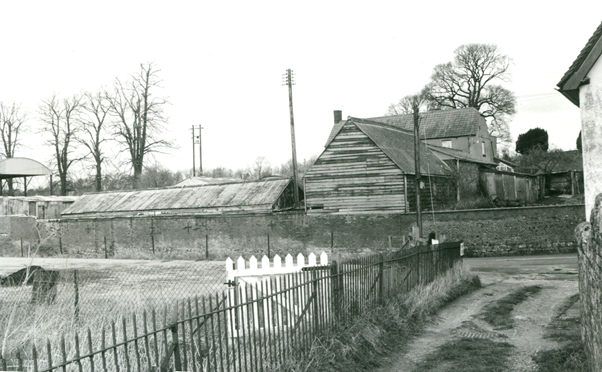 What we see here is a corner of Meadow Cottage on the right. We are looking up the track by this cottage to the main road which runs across the picture just this side of the brick wall. The other side of the wall is where we see Grove Farm – buildings and farm house.

On the left of the picture, behind the metal railings was an open area which may have been used for light agriculture at the time but had seen usage as a school adjunct in times past.

Now we fast forward to October 2014 and recreate the same view.

Meadow Cottage, on the right, is still much the same. The track alongside looks tidier, but is also still much as it had been.

The area to the left now has a couple of houses and a neat wall around the garden. The wall on the other side of the road maybe looks less well kept than it did 42 years earlier.

Grove Farm has entirely gone. The farmhouse, barns and buildings have all been swept away. Where once a Dutch barn and sheds stood we now have our Community Hall. We’ll be using it tonight for our annual Museum Miscellany.

Up on the hill we can see the cottages which were built when the hall was and other houses on the Grove Farm estate.

So all change – but change can often be for the better – and the Community Hall is a fantastic asset within Market Lavington.

We look forward to seeing you tonight – 7.30 in the hall for a couple of hours of local history, local food and a bar to make sure your needs are met.