Goodness! What changes can happen in 25 years. None of the buildings seen in the photo below still stand today. Many people would say that the village has improved as a result – but with regrets, of course. 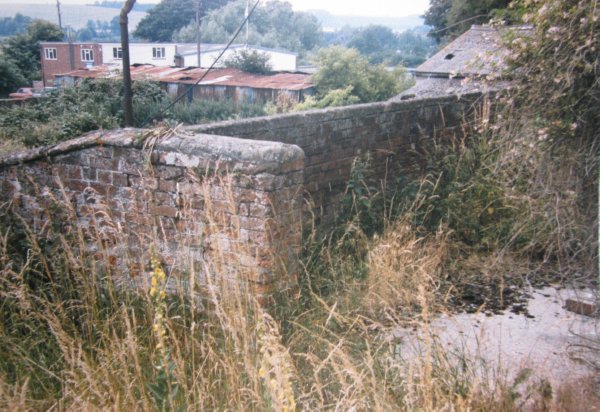 Grove Farm and The Spring Filling Station, Market Lavington, in 1986

The photographer was standing on land above the old Grove Farm. The foreground walls were clearly a part of the farm but just what function they served, we do not know.

Above the walls, on the right hand side, we can see some of the slate roof of the farmhouse.

To the left of the house, we can see corrugated iron sheds which backed onto the main road through Market Lavington, known in this part of the village as The Spring.

Across the road is the old Spring Filling Station – the garage set up there by Eddy Haines in the 1960s although by the time of this photo it had changed ownership and name and was called Shires Garage.

And every bit of it has gone. The garage, like many a village filling station, could not compete with supermarket prices. Once upon a time, a traveller between West Lavington and the Chirton end of the B3098 would have had access to petrol in West Lavington, Market Lavington, Easterton, Urchfont and at Wedhampton. All have gone. On that former garage site in Market Lavington we now have Shires Close providing homes for five families in the village. Many folks, though regret the absence of a petrol station in the area.

The Grove Farm site has become the Community Hall. The photographer must have been somewhere around the upper car park. The house stood more or less where the lower car park is now.

In the background of the photo we can see Salisbury Plain and that, of course, is still there and more or less unchanged.