These days an interesting development of houses is known as Gye’s Old Yard. But of course, Gye’s Yard was where the family firm of builders, carpenters, blacksmiths, wheelwrights etc. actually worked 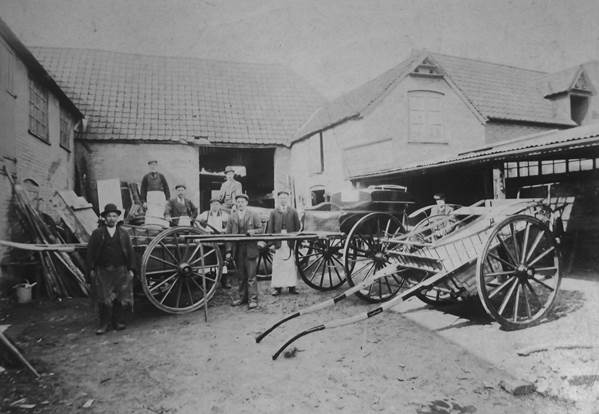 This charming photo shows some of the workforce, and maybe the odd visitor too, in 1906. The various carts are of course a delight. Maybe an expert out there can tell us more about them.

But now the people. From left to right we have:

John Merritt Senior – the father of the John Merritt who was bandleader in Market Lavington for 60 or more years. The Merritts ran a blacksmithing business just across Broadwell from Gye’s Yard.

John James was a carpenter and may well have been employed by the Gyes.

Walter James was John’s son – he had married Elizabeth Gye in 1904 so was a family member by marriage. He was a baker and had the premises now occupied by the Post Office in Market Lavington.

Charlie Burnett was the Gyes wheelwright. He originally came from Easterton.

Tom Gye. Gyes often confuse by not being known by first names. We think this is the present Tom’s grandfather – boss of the firm.

This one is just recorded as J Gye. We think it is Joseph who later became head of the family firm.

Fred Burgess who worked as a labourer and at some time became a butcher.

Seymour Buckland was a painter who lived on High Street in Market Lavington.

It seems appropriate that members of the Gye family should mark the end of another year. Our museum owes so much to them for their support and generosity.