Harry Edwards, Shepherds and the Cubs

It was great to welcome a party of cubs to the museum on Monday evening. The enthusiasm of the lads (and one lass), their leaders and the mums who turned up was fantastic.

One lad was very keen to donate a piece of iron pyrites he had found. It occurs as nodules in chalk areas and many people call it a meteorite. The interest the lad had was fantastic.

Now to Shepherds. The piece with a shepherd’s crook the other day brought this response from John. John and his wife Pat, Left Market Lavington for Australia in 1976. John has a fantastic memory and often sends us snippets of information.

I’ve been reading the Blog on the shepherd’s crook and the piece about Harry Edwards.

Well another Shepherd in Lavington was William Perry (always known as Shep Perry). I can remember clearly an old caravan like a gypsy shape being on Lavington Hill where the shepherds used to sit or stay when tending their sheep. I remember it being along the ridge road towards Easterton and about 300 metres in.

William Perry Senior and young William (known as Bill), his brother Fred and Terry Sainsbury used to rabbit on the plain. Each day they took their old Dodge truck up to the plain and collect the rabbits they had snared that night. William Senior had the job of preparing the rabbits for sale. He had a wonderful way of cutting and gutting them in one easy move. The rabbits all had their back legs tucked through and placed on poles across two wood horses.

I used to spend a lot of time at Perry’s engineering shop in the woods behind their house and I remember having tooth ache one day and old William Perry tied a piece of string to my tooth and the other end to the house gate and then said stand still and slammed the gate (no more pain and no more tooth).

And so to Harry Edwards. 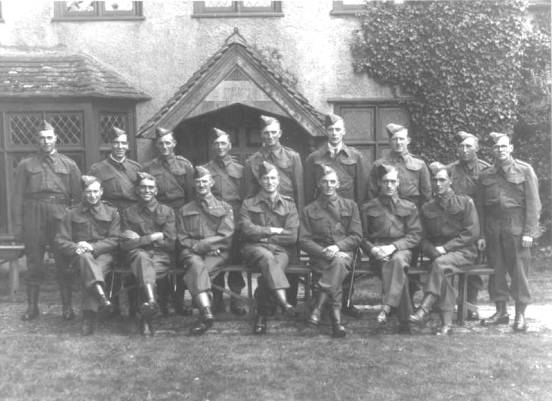 Caption giving names of many in the Home Guard photograph

This picture of the Home Guard dates from 1940 and the caption tells us that H Edwards is second from left in the back row. This photo, by Burgess Brothers of Market Lavington was taken at The Old House on Parsonage Lane.