These days, if people have nothing better to do, you tend to see them sitting holding a little black item, busily sliding a finger over it or tapping it. They are probably playing a game on their smart phone or tablet.

In times past, pastimes were, no doubt, just as silly, but without electronic wizardry, they were much simpler. People of a certain age will, no doubt, remember playing patience, not on a screen, but with a pack of cards. Today we are looking at patience cards, packed neatly in a red cardboard box.

These cards were once the property of Mr Norman Neate of White Street, Market Lavington. He had some difficulty with his legs and had difficulty getting around. No doubt he needed to play a game of cards to keep his mind active.

But playing cards are quite big. Patience cards are often half the size but these are quarter size. 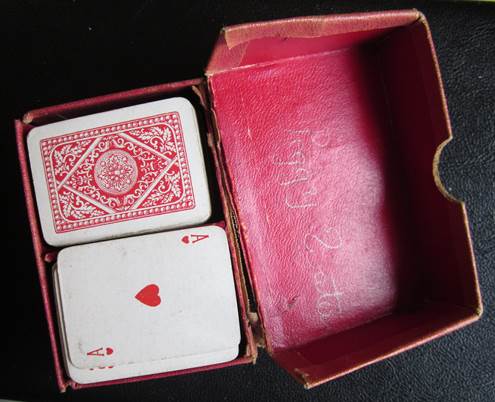 The cards in the box are one quarter size

Opening the box reveals two perfectly formed packs of miniature cards – and actually, by the look of them, Norman hardly ever used them for they look pristine. We think these cards date from the 1920s.

Who was Peggy Waters?

It would seem the cards have also belonged to Peggy Waters. We do not know who she is (or was)