Having fun in past times.

These days, for many having fun means watching the TV, listening to recorded music or playing electronic/computer games. In times past, most such activities were not available and more active and more homespun activities were a normal part of life. Village events were hugely important – anticipated for weeks beforehand and talked about for weeks afterwards.

One such event was the carnival and our picture shows a number of girls who had dressed up for the occasion. 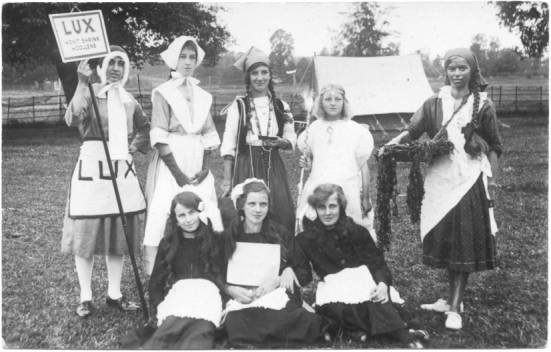 This photo is believed to date from around 1919 – a time when dads who survived the First World War would have been returning to their old homes and trying to pick up the pieces of their former lives. One wonders what tales can be read in the faces of these teenage girls who, fortunately, we can name because the original owner had named them on the back of the photo. 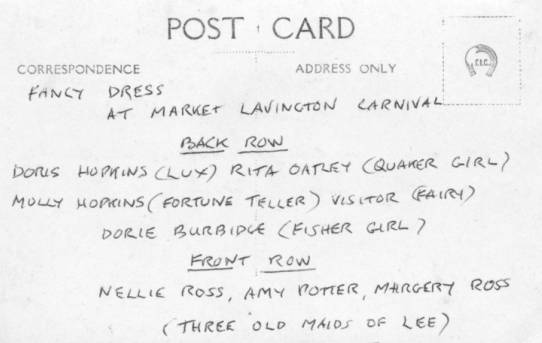 Information on the back of the photo

So here we have Doris Hopkins as the Lux girl, Rita Oatley as a Quaker girl, Molly Hopkins as a fortune teller, an unknown visitor as a fairy and Dorie Burbidge as a fisher girl plus Nellie Ross, Amy Potter and Margery Ross as three old maids of Lee.

The three old maids of Lee come from a poem by Frederick Edward Weatherly called, ‘A Bird in the Hand’.

Dorie Burbibge lived in the building which is now Market Lavington Museum.