A scrap book of news cuttings from 1957 has been receiving some attention at Market Lavington Museum. The glue and tape used to stick newspaper into the album has not stood the test of time well and whilst most of the articles are clear enough to read, one in particular was in a poor way. Parts of it were all but unreadable. 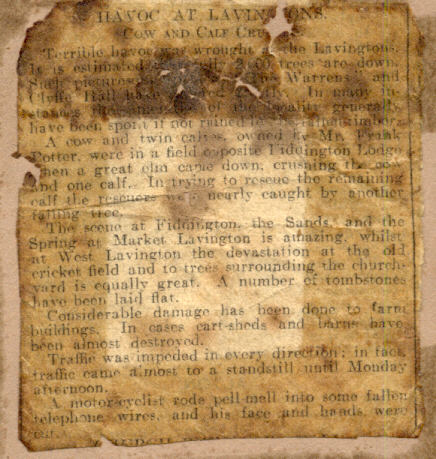 Careful use of computer enhancement has revealed this story.

Terrible havoc was wrought at the Lavingtons. It is estimated that fully 2000 trees are down. Such picturesques scenes as The Warrens and Clyffe Hall have altered greatly. In many instances the amenities of the locality generally have been spoilt if not ruined by the fallen timber.

A cow and twin calves, owned by Mr Frank Potter, were in a field opposite Fiddington Lodge when a great elm came down, crushing the cow and one calf. In trying to rescue the remaining calf the rescuers were nearly caught by another falling tree.

The scene at Fiddington, the Sands and Spring at Market Lavington is amazing whilst at West Lavington, the devastation at the old cricket field and to trees surrounding the churchyard is equally great. A number of tombstones have been laid flat.

Considerable damage has been done to farm buildings. In cases cart-sheds and barns have been almost destroyed.

Traffic was impeded in every direction: in fact traffic came almost to a standstill until Monday.

If any residents of Lavington in 1957 remember the storm and can tell us more about it, we’d love to hear from them.