We have met Helena before on this blog. It would be impossible not to come across this wonderful lady if talking about Market Lavington in the 20th century.

Helena came into this world in 1903 at a time when her grandfather’s horse bus service was the main link between Lavington and Devizes although that was beginning to founder with the opening of the railway and Lavington Station in 1900. Helena, who was always known as May, lived with her parents on Parsonage Lane. Ed Potter, her father, was assisting his father in the business interests he had, by working on the farm.

We know that Canadian Soldiers were billeted with the Potters at one time. Maybe they inspired May to want to do her bit for she worked on the land and later did Red Cross work too.

She was still Miss Potter when she started teaching the infants at the Market Lavington School. That was a job she had for life and people in the village in their nineties recall being taught by Miss Potter and some perceptive sub 40 year olds recall that Mrs Elisha still came in to do supply work on occasion. But teaching at the day school was not enough and Miss Potter also was the Sunday School teacher. When May married Bill Elisha in 1929, the children all clubbed together and bought the couple a clock.

Perhaps sadly, the Elishas had no children of their own, but May had an extensive family of real relatives and an even wider family of the children in Market Lavington.

After retirement, May continued to serve the village. She became a member of the Parish Council – Husband Bill had once been chairman.

This news clipping recalls her long years of service. 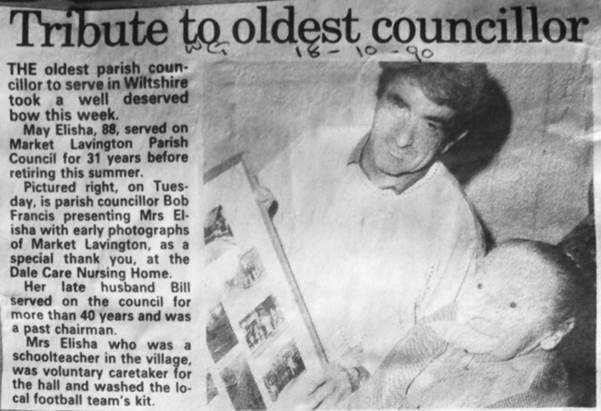 The hand written note tells us this was in the Wiltshire Gazette on 18th October 1990. May is looking frail, but we learn she had only recently retired from her 31 year stint on the Parish Council. She is being given some photos of old Market Lavington by fellow councillor Bob Francis.

May died about a year after this photo was taken.

Sadly, the other person in the photo, Bob Francis died before the end of the 20th century as well.