One of the odd items we have in Market Lavington Museum is this lavatory chain with a handle badged by H. A. Cannings, Market Lavington. The writing is a bit worn so it looks as though this chain has been pulled quite often since it was made in the second half of the nineteenth century. 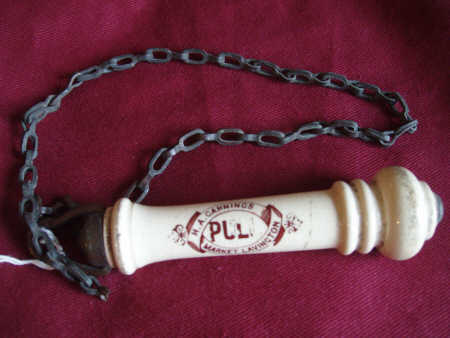 Henry Cannings was born around 1840 in Market Lavington to Henry and Eliza. Father Henry, born in Devizes was a plumber in quite a big way for in 1851 he employed 4 men and 2 apprentices. He also occupied 23 acres of land and employed a labourer. Mother, Eliza, had been born in Wales. Our Henry was one of seven children in the family in 1851. They lived on the High Street.

By 1861 our Henry Albert was a plumber so we guess he worked for his father. Three more young Cannings had been added to the family.

By 1871 Henry was married to Eliza and a third generation Henry had been born. Our Henry was a master plumber employing two men and living on High Street in Market Lavington.

In 1881 Henry employed 6 hands in the plumbing business. At the time of the census three adult stepsons were with the Cannings. They had the surname Ellis.

The business continued but by 1901 Henry was a widower – still on High Street in Market Lavington.

When Henry died, in 1904, it was in the Havant district of Hampshire.