We have met Henry before. He was a plumber starting off being trained by his father back in the mid nineteenth century. He was also called Henry and after Henry (the second) married he had a son called Henry – it all gets a tad confusing.

Henry lived virtually all his life living on High Street in Market Lavington. Born in 1940, he died in 1904.

Now to be strictly honest we can’t be sure if the item we show today – a small trade plate – belonged to Henry the elder or the middle one. We do think it is 19th century. 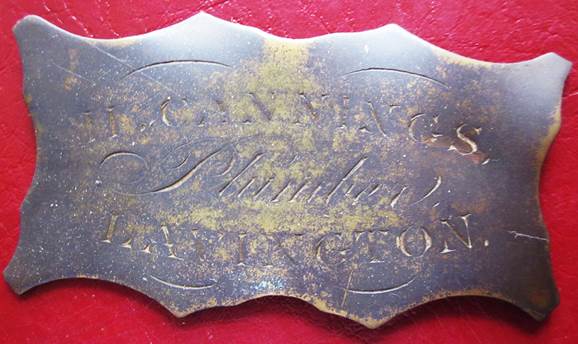 This little plate – is about the size of a current business card. It is made of brass. It is clearly labelled

The odd thing is that this plate was found in a garden in West Lavington.  We do not know what its actual function was, but presumably Henry carried it with him when out on jobs.