One item we have in Market Lavington is a short birth certificate for Ivy Ada Constance Bishop. 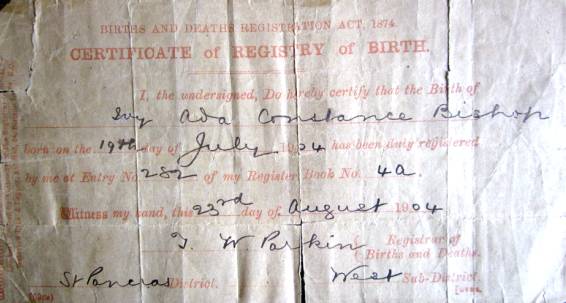 From this we can see she was born on 19th July 1904 and the birth was registered in the St Pancras West district of London. That, basically, is all the information you get with the cheap, short birth certificate. There are no parents named to give much clue for further research. You could, of course, order a full birth certificate. The district of registration, book number and entry number are all you need. Certificates cost money and so we’d try to avoid getting them at the museum.

These days there is a 1911 census – but it needs some thought to get what you want without paying. However, from that we think Ivy’s parents were Frederick and Leah and she had a younger brother called Charles

Ivy A C Bishop married Henry Potter in 1932. We have the marriage certificate at the museum.

Now this is a much more useful document for genealogy. It gives the names of the fathers of the couple (assuming they are known). It gives the occupations of the fathers and the groom ( a railway clerk on the GWR). It gives the ages of bride and groom. There are also witness names and they look to be family members in this case. Of course we can see that the couple married at Market Lavington Church and the service was conducted by the vicar, John Anthony Sturton.

With the age and father of the groom – Henry Potter, we can trace his background.

It is easier to locate people in rural areas simply because there are less people. So we know Henry was with his parents in Market Lavington in 1911.

A 1926 electoral roll we have at the museum shows Henry was still with his parents in Market Lavington.

Our 1939 electoral roll does not include Henry and Ivy so they were not, then, in Market Lavington.

We have a burial register at the museum and from this we know that Henry died in 1953 at the Royal Berkshire Hospital, Reading. He was buried in Market Lavington on the 23rd December of that year.

Our museum’s 1966 directory tells us that Ivy was living at Lyndale, New Street, Market Lavington. New Street is more usually known as The Muddle.

We have no record of any children born to Ivy and Henry.

We have done quite well from those certificates and could be well placed to search further back.