A real treasure at Market Lavington Museum is a Gye photo album containing photos of many a Gye who was born in the Victorian era. Not all are captioned and where labelling exists it is much more modern than the photos themselves. The Gyes have been a leading village family for generations and we are lucky to have such a lovely collection of images of family members. The album itself is rather fragile and is kept in store, but do ask if you want to see it. 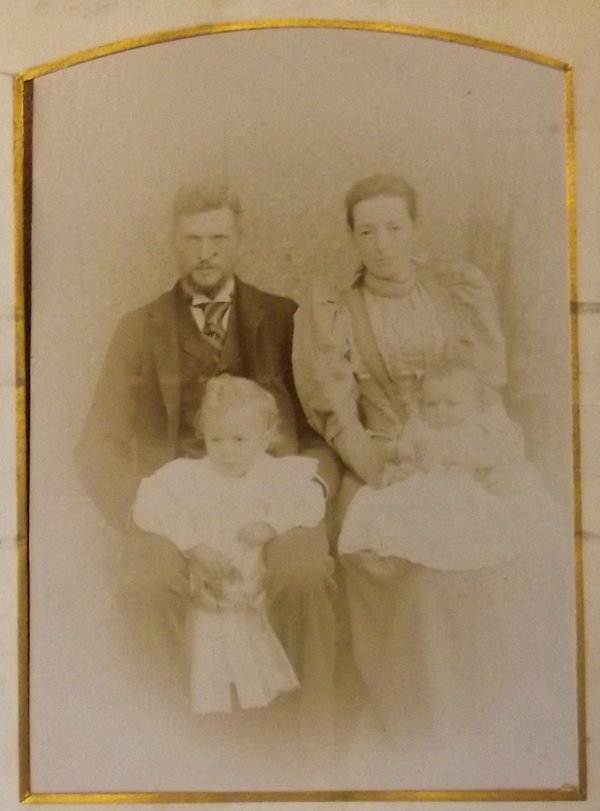 Hester Reed and family at the end of the nineteenth century. Hester was born Hester Gye in Market Lavington in 1863.

Hester was born in about 1863. Her parents were James and Mary Ann Gye. In 1871 the family lived on Stobbarts Road in Market Lavington. Hester had three younger sisters. James, a carpenter, had been born in Fiddington which was then part of  West Lavington. All of the rest of the family were Market Lavington people.

In 1881 Hester was a servant working and living in Devizes.

In 1891, Hester was cook for the Duke of Fife who lived in Mortlake, West London.

For the 19o1 census, the family were at Mews Farm, Mayfield Sussex. Hester’s husband appeared to be called Richard and he was a tenant farmer. There were four children. We guess it is the oldest two, Thomas and Florence shown in this picture.

In 1911 Hester was head of a large house and household at Portman Square in London. Five of her six children were at home and her cook was her sister, Emily Gye. There were several lodgers. Husband Tom was not amongst those present. All of the children were born at Mayfield in Sussex.