What a picture! What a photograph! Our picture today was taken by modern digital technology. If more light was needed, the camera would have made that decision and fired off its electronic flash automatically. How different that is from times past. Many people will remember a time when the local press photographer had some magic powder (magnesium) which he could ignite to create a huge flash – and, probably, a room full of smoke.

Then came the much handier flash bulb – a thin magnesium ribbon in a bulb. This could be ignited with an electric current and, with a ‘hot shoe’ flash, the camera shutter could be used to complete the circuit to fire the flash. Photography, with these bulbs enabled ordinary folks to get photos in poor light.

But there was a price to pay. Each bulb had a life of one flash – and they weren’t cheap. Photographers used them sparingly because they significantly added to the cost of the photo.

And here we have a packet of these bulbs – only one of which has been used. The others are still in place and no doubt they could be fired. We can see they cost 50p and that puts them at the end of the flash bulb era. Decimal money came in in 1971. Our curator is sure he bought his electronic flash gun (which still works today) about that time. Of course, 50p sounds almost nothing these days but we are looking at a time when a teacher earned less than £1000 a year. On that basis, using a flash added the equivalent of a  pound or so to the cost of a photo – something we wouldn’t think of doing these days.

The main reason we like these flash bulbs, though, is because they were sold by Peter Francis from his shop on Church Street in Market Lavington. 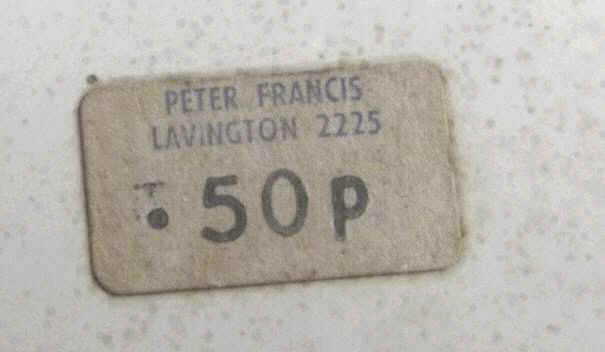 The bulbs cost 50p and were bought from Peter Francis of Church Street, Market Lavington

Peter’s label reminds us that Market Lavington once had its own telephone exchange although by the 1970s, all phones had four digit numbers.