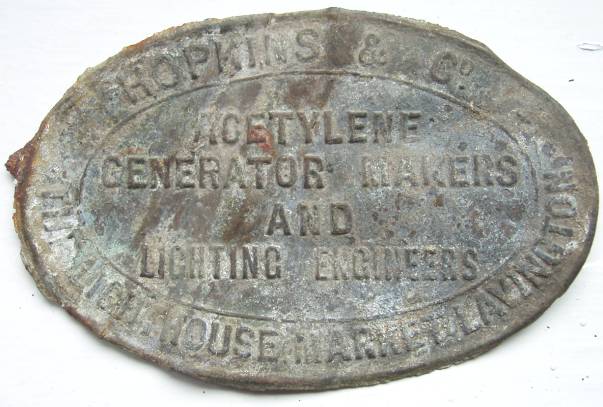 Several buildings in Market Lavington have large square brackets on the wall (The Workman’s Hall for one) which once held gas lamps, no doubt supplied with gas by the Hopkins family.

The Hopkins ran a number of businesses in Market Lavington. Generating acetylene gas and supplying it was one thing they did. The family also were builders’ merchants as well as builders.

The Museum’s little copper plate, some 8cm across, is one artefact amongst several we have. What the Hopkins called ‘The Lighthouse’ we now know as ‘8, Church Street’. The Hopkins main shop was next to what is now the Drummer Boy pub. There were also premises where Milsoms Court now stands.

Some of the Hopkins family are buried in the Drove Lane Cemetery. A click here will lead you to information about it.