On April 1st we play tricks on people in the UK. But there is no trick here. This page is as genuine and serious as all of the other posts on this blog.

The book, Hymns Ancient and Modern, is not of itself really a museum item. 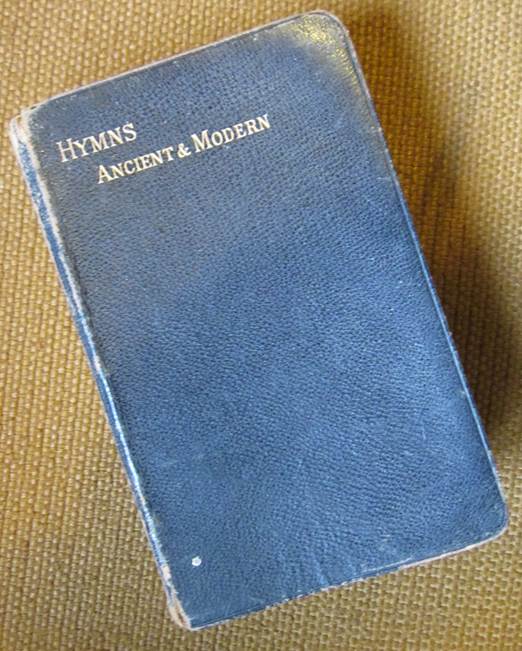 These books have been printed in huge quantities and there needs to be something special for them to be kept in a museum. In this case it is the inscription on the fly leaf. 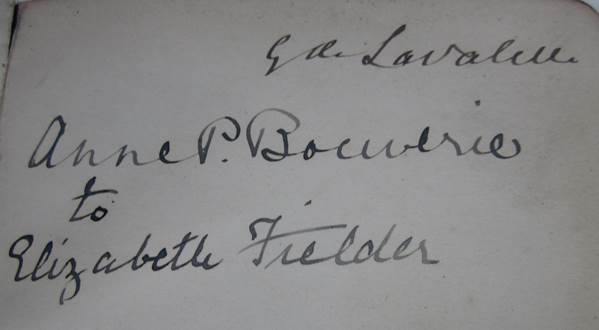 This inscription is the only item we have from the Marquess de Lavalette, former resident at Market Lavington Manor

The top name reads G de Lavalette. This was Georgina, Marquess de Lavalette and we can find her on the 1901 census as the head of house at Market Lavington Manor. We knew she rented the house for when Charles Awdry purchased the manor in 1902 he took on Georgina as a tenant. We know little of Georgina although we have seen her car on this blog – a fine Mercedes (click here).

The 1901 census lists her as a gentlewoman who had been born in Edinburgh some 77 years earlier. She was a widow and the other nine residents were all servants.

Brian McGill, in his wonderful book about Market Lavington called Village under the Plain, suggests that Georgina died in 1907.

From the site www.thepeerage.com we can find that

We’d love some further information as to why this widow of a French Marquis ended up at Market Lavington.

The next name on the book’s flysheet is easier to know about. Anne P Bouverie was Anne Pleydell Bouverie, resident of The Old House in Market Lavington. She was born in about 1844 and lived to a good age. She died in 1940 so people still alive remember this old lady who became increasingly reclusive. Anne was the daughter of Edward who built the Manor House.  It is not clear if Anne ever lived at the Manor but by 1901 she was at The Old House where she remained – a spinster lady – for the rest of her life.

How she got the book, we don’t know but she clearly passed it to Elizabeth Fielder. We do not know who she was at all. We have no record of any Fielders in Market Lavington or Easterton.