In the jam factory

Back in 1985 the Easterton jam factory – Samuel Moore Foods – was in the throes of expansion. It was quite a large rural employer and perhaps that is why the factory was able to get one of the leading royals to officially open an extension to the factory.

It was Princess Anne who came to do the honours. The children from St Barnabas School went to be part of the cheering crowd and Easterton was very much ‘en fête’ for the day.

We suspect it was a worker at the factory who captured the photo below. 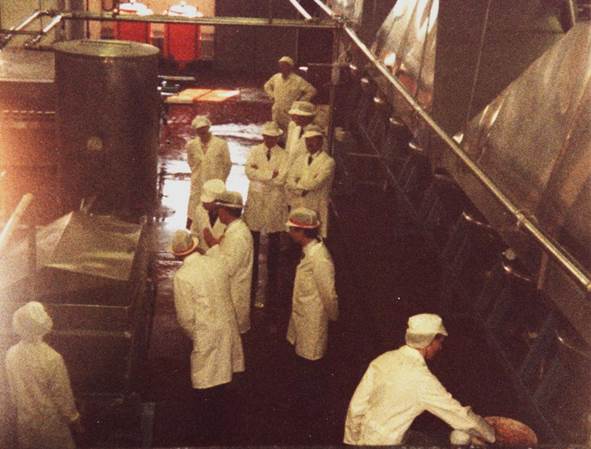 It isn’t clear that the Princess is in the photo – she’s in the group of three wearing a very white peaked cap. But apart from HRH, we see a glimpse of the interior of the factory when it was working.

Not being commercial jam makers we have no idea what the machines were, but huge ‘cooker hoods’ on the right presumably caught steam/fumes and sucked it all to the outside world. Presumably they are boilers, for cooking the jam, underneath them. The worker at bottom right appears to be stirring a vat of fruit.

The jam factory is now but a memory, completely swept into oblivion. It won’t be long before the first houses built on the site are occupied