Photographs taken inside Market Lavington Manor are almost as rare as hens’ teeth but here we have one, albeit of poor quality.

Let’s start by remembering that the Market Lavington Manor House is not, by the standards of these things, of any great age having been built in the 1860s. It reflected, no doubt, a desire for gracious rural living that was reaching its sell by date even when the house was built. Estates dependant on local agriculture proved unable, certainly in this case, to provide the income that the Lord of the Manor, Edward Pleydell Bouverie required.

Our photo shows the hall of the manor, ‘during Bouverie days’ and it shows a room built and furnished on a lavish scale. 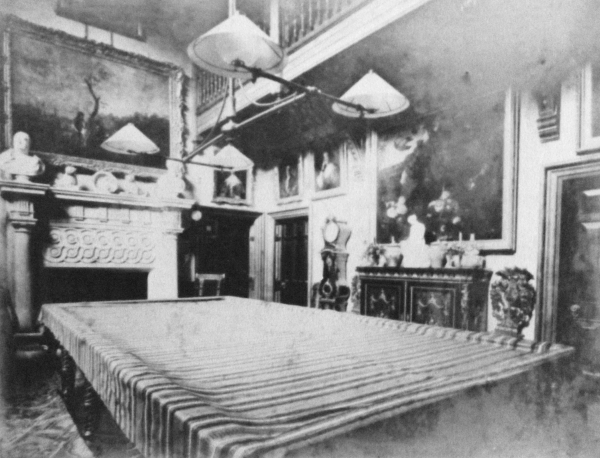 The Hall at Market Lavington Manor in Bouverie days

It isn’t clear what is under the large, striped cover, but it could well be a billiard table (one suspects snooker might have been deemed a rather common game whereas billiards was much more gentlemanly). It, and the other décor  reflect the grand lifestyle.

At the end of the room there is a huge open fireplace. Feeding the fire would have required servants, not to mention foresters to cut down trees and prepare logs of a suitable size. Above the fire there is a painting. In this photo we are unable to judge its quality.

The furniture along the side wall sits under a balcony. Maybe spectators could watch something of the billiards from there. There is a very French looking clock, a number of portraits – maybe of Pleydell Bouverie ancestors and another huge painting. There’s also a highly decorated and handy little cabinet.

It certainly looks as though the Lords of Market Lavington Manor lived the high life, in terms of possessions. But of course, possessions do not equal enough cash to live on.