In the New Cabinet – Along the High Street

Market Lavington might be thought of as a village now, but it was, once, a market town with a long, busy High Street. Our ‘new cabinet’ walk takes in the High Street and other streets with commercial properties – notably Church Street and White Street. We are looking at shops and banks and some of the items found in them. 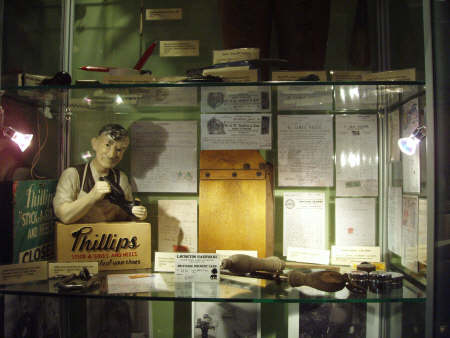 On the left, we have various items from Ken Mundy’s shoe shop which used to be between the present Co-op and newsagents. There’s his open and closed sign and his advertising man – both given by Phillips Stick-a-Soles and heels’ and also a shoe stretcher for accommodating bunions.

From the hardware shop, once upon a time opposite the Co-op, we have a loyalty card from the 1990s.

There used to be more than one butcher in the village, and how lucky we are still to have one. We think our butcher’s cleaver and steel came from ‘Piggy Ward’ who had premises next to the present Post Office.

Back in the 1970s there were four different banks in the village and we have the money weights from Lloyds which was near the Co-op.

The photographer – and how lucky we have been to have had professional photographers in the village for 130 years – is represented by a trimming guillotine.

The back drop to the cabinet is made up of bills from may of the village traders. There’s Hobbs, Doubleday and Frances, Gyes, Hopkins, Neates, Potters, Nottons – to name some of them. The shelf is not full yet and there’s space for more so do come and see it when the museum opens in May.