In times past, all entertainment was home produced. We are going back to those days when entertainment for the masses wasn’t beamed through the air for all to receive. No Internet; no TV; no radio although at the time we speak of here, that had been invented. So, too, had films but they were probably very rarely seen.

Some rich folks may have had gramophones to play the truly amazing records or phonographs which played cylinders. But for most, if you wanted music, you made it yourself – or knew somebody else who did. No wonder bands were so popular. And of course, Market Lavington had its own band. We are going to look at a photo which dates from June 2nd 1911. 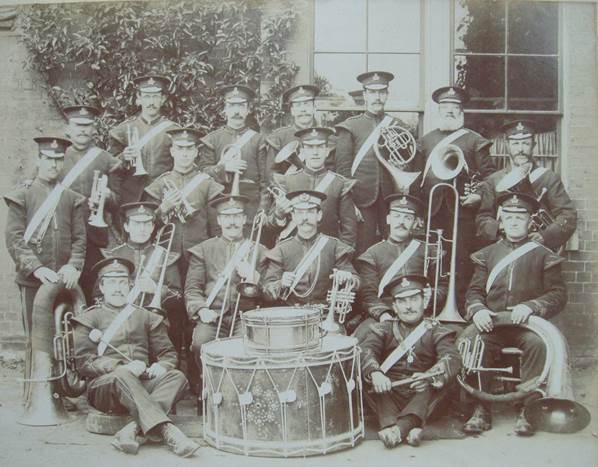 Things have come together well on this photo. Apart from a precise date, quite a few of the men are named. 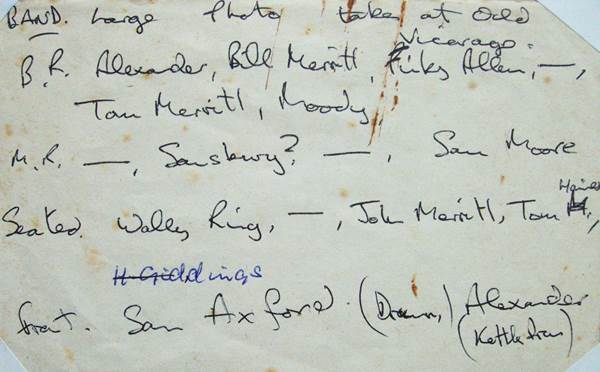 This photo is well captionned

Very handily, the photo dates from just a couple of months after the census was taken. We can easily find a little about these people.

Bill Merritt, for example, was a gardener and lived at The Hollow on Lavington Hill. Finky Allen has had a mention before on this blog. He was a watch and clock maker/repairer operating on the High Street. Thomas Merritt was a blacksmith living on Church Street in Market Lavington. Tom Moody had been a miller but by 1911 he was a fruit grower living on the sands.

Sam Moore was the Easterton jam factory man – still very much a cottage industry in 1911.

We think Wally Ring must have had the name Harry. In 1911 he lived at The Bothy, in the garden of the Manor House and he was a gardener. John Merritt was already 20 years into his spell as band leader. He still had more than forty to go! At that time he called himself a cycle agent, living on Church Street, Market Lavington. Tom Haines was a hairdresser also living on Church Street. H Giddings, who has an instrument called a helicon, may have been Herbert, a brewer’s carter living on Stobbarts Road or Harry, a carter living on Northbrook.

Sam Axford was a cycle repairer living in the Market Place.