Back in August 2010 we were given a high level toilet cistern supplied by Hopkins Brothers of Market Lavington. It had been replaced at a house on Drove Lane.

The cistern was supplied by Hopkins Brothers of Market Lavington

It has taken time to find a home for this item but it is now wall mounted in the trades room in the area that deals with water. Alongside it is a label, which explains that mains water didn’t arrive in Market Lavington until 1936 and the mains sewers weren’t put in until 1956.

Now the cistern has a home, a little extra has been added in the shape of a spare toilet roll. This is a roll of Izal toilet tissue and dates from the 1960s. 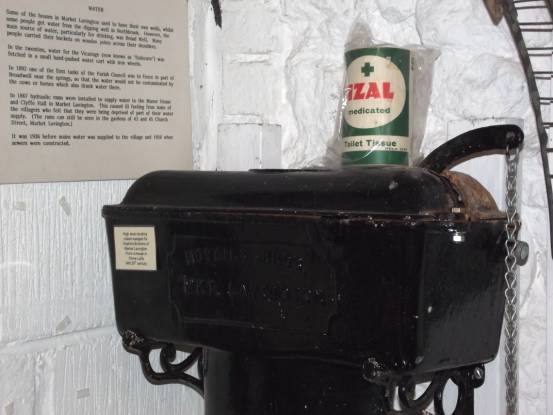 If you want to know anything of the history of toilet paper then there is plenty of information on line. This site – toilet paper world – may be American but it is packed with information.

Many folks seeing that Izal name, will remember the scratchy hardness of the paper, which could also double up as tracing paper. Apparently it is still available!