Mr Maddox was a resident at Fiddington House Asylum in the 1940s (possibly before) and 1950s. His tale is one of those which perhaps shows past unfairness to people who don’t quite conform to the most usual norms of social behaviour. One would guess that in the 21st century, Mr Maddox would have been diagnosed with asperger’s syndrome. He may well have found an appropriate job to suit his undoubted skills and would probably have been regarded as a useful member of society. But in those less caring days, within living memory, he was classed as a lunatic and housed in an asylum.

However, it was not all bad. It seems to have been recognised that Mr Maddox was harmless, gentle and of a generous spirit. He was not locked away but had a bicycle and rode into the village centre with his long, white beard blowing in the breeze. In his pocket he had verses of text which he had cut from a bible and he gave these to the local children. They, not surprisingly, called him Jesus and he is remembered fondly by those village youngsters. This could be because, at times, he gave them sweets. In the present climate of opinion this might have been regarded as a bit odd, and maybe it was, but nobody reports that Mr Maddox was ever anything but a decent chap.

Well actually, Vicars at the time might have got a bit fed up with him, for his real fixation was with sundials. He regularly checked the sundial on the church and found it to be eight minutes out, at which point he’d send another grumbling letter to the vicar wanting it put right.

Mr Maddox did sundial calculations on a door at the asylum and we have this door in Market Lavington Museum – a particularly fascinating relic from a former era and a past way of treating people with mild psychiatric disorders. 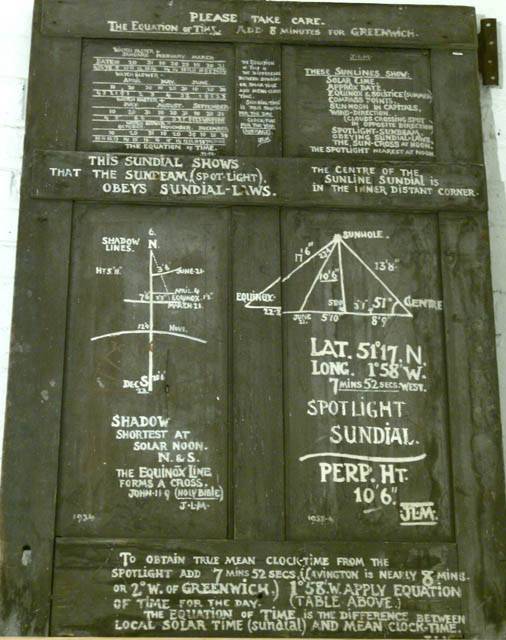 If anybody knows where Mr Maddox came from or where he ended his days we’d love to hear from them.