Jacob Smith was one of the famous family of pond diggers who hailed from Market Lavington. Our photographer seems to have chosen to have the people upright rather than the landscape. 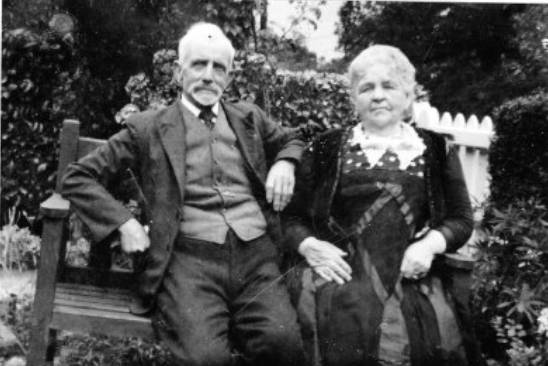 We have some information about Jacob and his wife

Jacob was born in Market Lavington in about 1856.

In 1861 Jacob was living on Northbrook with mother Sarah. She was described as a pond digger’s wife.  The census notes H. absent – so I’d presume Jacob’s father was away making a pond somewhere. Jacob  had an older and younger brother present at the time of this census.

In 1871 Jacob was lodging in Lambourn in Berkshire and he was described as a pond digger.

Jacob married Mary Ann Scratchley towards the end of 1879. She was daughter of a West Lavington agricultural labourer.

In 1881 Jacob was living on White Street, surrounded by other Smiths. He had his wife, Mary Ann with him and was described as an agricultural labourer – maybe the need for pond makers was less at that time for some reason.

In 1891 Jacob was called a pond maker He lived on White Street with his wife Mary Ann. There do not seem to have been any children to this marriage.

In 1901 Jacob was a pond maker visiting Mildenhall near Marlborough. Another pond digger from Market Lavington was with him so presumably they were working in that area. Mary Ann Smith was at home on White Street with a niece called Rose Polden.

In 1911, the couple were still on White Street and Jacob was still a pond maker.

Both Jacob and Mary Ann died in 1918. They are buried in Market Lavington churchyard.

Pond makers produced so called dewponds – which actually collected mostly rainwater. This allowed farm animals to survive on the chalk lands. The making of such ponds was technical and hard work. The Smiths had a wide reputation for their skills.

This letter, published in The Sussex County Magazine in July 1953 describes a ‘Smith’ pond in Nottinghamshire.

As an ex-resident of Eastbourne, with some family connection still there, I am interested in tracing any information that I come across in this county, that may be of interest to readers of your magazine, and I wonder whether the following might interest you.

During a visit to the Notts. Farm Institute, at Brackenhurst, near Southwell, I was shown a dewpond in the grounds, and obtained further information when I was told that it had been constructed by someone from the South of England. It does not appear that the person who constructed it, in 1952, is a native of Sussex, but he has constructed dewponds in that county.

The original dewpond at Brackenhurst Hall was constructed in 1928, by Tom Smith, of the Smith family, from Market Lavington in Wiltshire. When it became dry in 1950 attempts were made to find the original builder, but he had died in 1947. His business however, was carried on by Mr. R. E. Dear, who had worked with Tom Smith on the original dewpond, and Mr. Dear constructed the present pond. It was found that the cost of building a new dewpond would be less than that to build a static water tank, and the present dewpond is what might be called an “assisted” dewpond, insofar as some roof rain water is fed into it, (Part of the purpose of the pond, apart from ornament, is to serve as a supply of water for fire, if necessary). But the traditional methods of construction were used. Mr. Dear, incidentally, stated that he still constructs dewponds in Sussex. Berks and Wiltshire.

The Tom Smith mentioned in the letter was Jacob’s nephew. The Mr Dear mentioned had a mother who was a former Miss Smith so we can see that Smiths were still at work on ponds into the 1950s.