Karen recently let us copy a collection of photos in the Easterton area that included many jam factory workers. Karen and her brother visited us at Easterton Country Show. They are great grandchildren of Samuel Moore. Inevitably, they couldn’t name the people in the photos of workers, but we knew a couple who might be able to. John and Pat had both lived in Market Lavington and Easterton and Pat had been one of the jam factory workers. The couple emigrated to Australia in 1976 but they keep well in touch with the old home.

We sent copies of the photos to them and have answers. So here we have some jam factory workers. 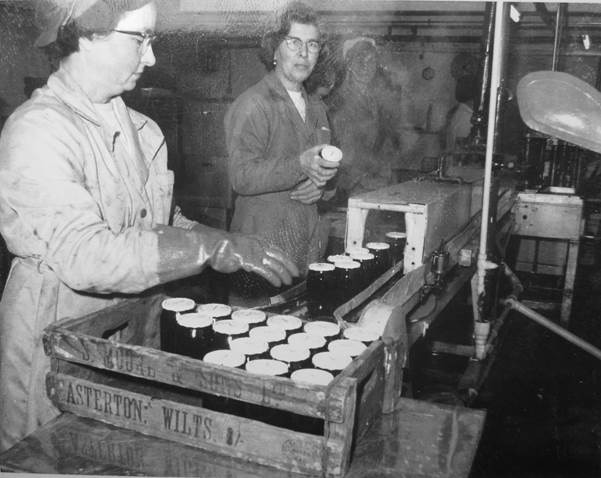 In this photo we have Genie Guntrip and Maureen Wiltshire. The photo rather fades away in the distance so we’ll probably not get the third lady.

Genie, in the hefty rubber gloves, must be picking up filled jam jars to put them in the wooden crate. We love that crate with its message of S. Moore & Sons Ltd Easterton, Wilts. And does it say 1/- after the Wilts? Does that mean there was a one shilling deposit on the crate?

Just what Maureen is doing is not clear for she just seems to be holding a jar. Maybe Genie had to take the crate away and Maureen took over the packing job.

Guntrip is an unusual name so we can be fairly sure that Genie lived on High Street in Easterton. Wiltshire is a more common name and there were several families around in the 1960s. And of course, not all jam factory workers were from Easterton or Market Lavington.

If you were a worker have you any stories you could share with the museum? We’d love to hear from you.