James Gye and some tiles from Market Lavington

James Gye was well known as a wheelwright himself, but also as an employer of builders and carpenters. Their premises were on White Street in Market Lavington – an area now known as Gye’s Old Yard.

James was born in about 1839 in Fiddington which would then have been an outlier of West Lavington, between Market Lavington itself and its tithing of Easterton. His father was William Gye who had farmed about 50 acres in Fiddington.

James married Mary Ann Durnford in 1861. In 1871 the Gye family lived in Market Lavington but in 1881 they were in the new parish of Easterton, possibly at the old family home at Fiddington. After a run of daughters, the couple had produced a couple of sons. Sadly, the elder of the two, also James Gye, died in April 1899 aged just 23.

April 1899 was the month in which a bill was delivered to James Gye for tiles. 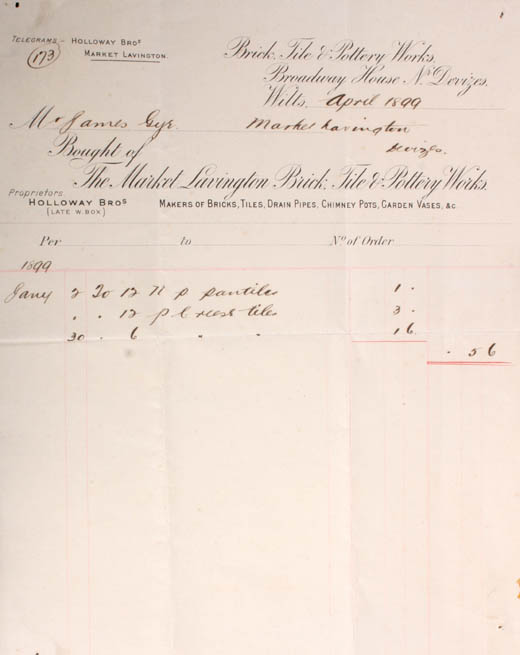 An 1899 bill from the Lavington Brick, Tile and Pottery Works to Mr James Gye can now be found at Market Lavington Museum

The bill came from The Lavington Brick, Tile and Pottery Works of Broadway House, Market Lavington. The house still stands having grown, in recent years, a Doric portico. Some of the industrial buildings of the old company are still extant and put to other industrial use. The quarries have been filled and that area is now the depot for a transport company.

The bill contains the entry ‘late W Box’. William Box had been the brick master for many years until his untimely death in 1894.

This entry about the Holloways comes from the Wikipedia website at http://en.wikipedia.org/wiki/Holloway_Brothers_(London)#Early_history

Holloways remained a family firm through several generations. The original brothers were sons of Thomas and Elizabeth Holloway, of West Lavington, Wiltshire where Thomas was a local jobbing builder and bricklayer. They had five sons, James (1851–89), Henry Thomas (1853–1914), John (1854–1932), Henry (1857–1923), and Samuel (1862–1938). Thomas moved to London to work with his eldest son James in 1868, and the rest of the family followed in 1870. James and Thomas became bricklayers and then general foremen, James at only about 18 and Thomas at 21, John was apprenticed as a carpenter, whilst in due course Henry joined a firm of timber merchants and Samuel began work in a solicitor’s office. James set up his own business with a few hundred pounds in capital in 1875 and by the following year had new premises at Marmion Rd Lavender Hill and his father and other brothers joined the firm. Henry became office manager, Thomas outside manager, John worked as a carpenter and Samuel apprenticed as a joiner. Initially the firm concentrated on speculative house building in Clapham but rapidly expanded to take on larger contracts such as churches, schools, public libraries and baths.

We can see that our brickworks was part of a much larger organisation, not dependent on James Gye and his few tiles to make a living.