James Gye was a nineteenth century carpenter and wheelwright in Market Lavington. He was the grandfather of Tom who still lives amongst us on White Street.

James was born in around 1839 in the Fiddington area (then a part of West Lavington). His father was a farmer there.

However, on leaving school, young James was apprenticed to a family firm of carpenters and wheelwrights – the Draper family.

By 1891 James was running the business on White Street – where the housing now known as Gye’s Old Yard stands.

Today we show a little piece of memorabilia associated with James – a letter to Mr Parriss, requesting ¼ hundredweight of ‘led coular’ paint. 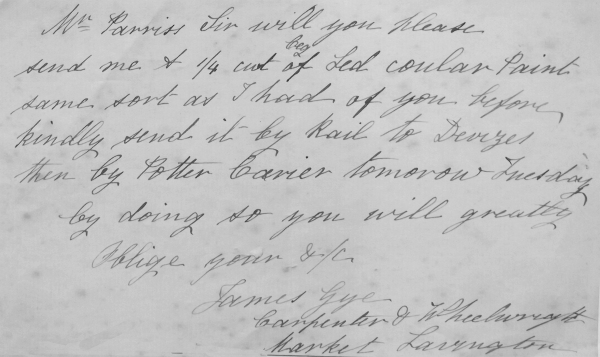 19th century letter from James Gye of Market Lavington, who was requesting paint.

James clearly felt he was in order to specify the delivery route, by train to Devizes and then using Mr Potter, the carrier to bring the paint to Market Lavington. Edwin Potter, the carrier, had originally been apprenticed to the same firm as James Gye (the Drapers) but he had found himself unable to cope with the dust and so he changed his job and became a carrier and a coach proprietor.

We do not know who Mr Parriss was, but we believe the letter dates from about 1880.